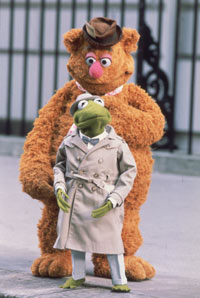 The earliest Muppets were created solely by Jim Henson. He drew rough sketches indicating what he thought the Muppet should look like, then set about building it. The first version of Kermit -- a lizardlike creature -- had a cardboard body covered in material cut from a fuzzy green coat that belonged to Henson's mother. Kermit's eyes were two halves of a spherical toy called Wacky Stax.

Some of Henson's other early Muppets were made from hard materials, like papier-mache, but Henson soon settled on soft materials. These give Muppeteers (Muppet puppeteers) the ability to make the Muppet emote. Because Kermit's head is essentially a fabric covering over the Muppeteer's hand, for example, the puppeteer can change his expression by moving his fingers and tilting his hand.

Henson soon realized that designing and building each Muppet on his own was impossible. So he began adding designers and builders to his team, starting with Don Sahlin. Henson continued to sketch most Muppet designs, relying on his team to flesh them out and bring them to life.

New Muppets still begin as sketches and move to detailed concept drawings. After the concept is approved by the workshop's creative supervisor, a builder creates the Muppet's head and body. Most Muppets are made of reticulated polyfoam, which is light, flexible and durable. (Some original Muppets were made of foam rubber, which disintegrates over time.) Depending on the type of Muppet, its head and body may be cut and sculpted from a block of foam or created by gluing together layers and pieces of foam with contact cement.

The builder next creates patterns for the Muppet's "skin" and pins them to the foam. After making adjustments, he cuts the skin material using the patterns, then pins, glues and stitches it to the foam. Many Muppets are covered in antron fleece (often known as "Muppet fleece"), which can be dyed any color. Other "skin" materials include flocking, fake fur and feathers. Both the color and type of material are important decisions, because they make a big difference in the Muppet's personality.

Most Muppets are either hand-and-rod or live-hand Muppets, and a few occasionally switch between the two. The Swedish Chef is a special case -- he is the only Muppet to have actual human hands instead of gloves. His head is operated by one Muppeteer (originally Jim Henson) and his hands by another (originally Frank Oz).

The composition of the Muppet's arms depend on if it's a rod-in-hand or a live-hand Muppet. If the arms will be operated by rods, they're usually tubes of stuffed fabric. The hands are made of a stiff material like thin plywood, foam and armature wire to give them shape. The thin black metal rods are attached to the hands at one end and to wooden dowels at the other. Live-hand Muppets have hollow arms and four-fingered gloves, which allow Muppeteers to insert their own hands. There is usually some extra fabric between the Muppet's body and the right hand to allow room for a second Muppeteer. Different versions of Muppets -- some with legs and some without -- are often built to allow for uses in different situations.

Because Muppets are filmed in close-up, their seams can't show or the illusion of realism will be spoiled. Muppet designer and builder Don Sahlin perfected a special stitch known as the Henson stitch. The fuzzy pile of antron fleece "skin" also helps to make stitches virtually disappear. Kermit has a seam running down the center of his nose, for example, but it can't be seen on camera.

We'll look at the Muppets' facial features next.

Who Owns the Muppets?