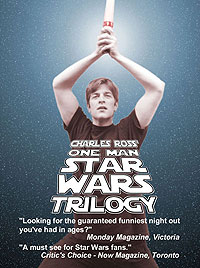 When people hear about Charles Ross and his "One Man 'Star Wars' Trilogy," they often leap enthusiastically to the same conclusion. Surely he's some sort of stereotypical uber-nerd who decided to take his obsession on the road. Even "Star Wars geeks," who might embrace him as one of their own, sometimes wonder whether he's taking his love of the trilogy too far.

But that assumption -- that Ross is a gangly, awkward geek who took a party trick on tour -- couldn't be more wrong. He's a geek, but he's also an actor. He has a Bachelor of Fine Arts in performance, and putting the show together required the same sort of writing, direction and rehearsal that all stage plays do.

We had an opportunity to interview Ross while he was in Stone Mountain, Georgia performing the "One Man 'Star Wars' Trilogy." We invited him to our office, where he answered all our questions about conceiving, developing and touring with the show. In this article, you'll learn about

Ross, his one-man shows and his love for geeks and "Star Wars."