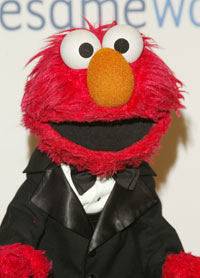 You can tell from Elmo's large pupils that he's a young Muppet.
Peter Kramer/Getty Images

Once the builder has the head and body completed, the Muppet needs features and accessories. Muppet palates are usually composed of one or more different types of materials: foam, fabric and a stiff material such as gasket rubber or cardboard. If the Muppet has a nose, it can be made from soft foam spheres or ovoids. Some Muppets don't have noses, and others, like Fraggles, have snouts instead.

A Muppet's eyes are considered its most important features. Most Muppet eyes are spheres -- either tacked on to the Muppet or set into sockets -- or flat ovals. The pupils are usually placed slightly toward each other to give the Muppet focus. They can also convey the age of the Muppet. The younger the Muppet, the larger the pupils [Source: Sesame Workshop Newsletter]. Another Don Sahlin invention, the Magic Triangle, refers to the shape formed by the eyes and nose. It's important to get this placement perfect, because it gives the Muppet focus and character. That's why the eyes are often the last thing to be placed.

Some Muppets don't have eyes at all; instead, glasses, lashes or eyebrows function as "eyes." Others have the ability to roll their eyes, blink or move their eyebrows. Builders use a variety of methods to accomplish this, including wires and strings accessible to the Muppeteer, remote controls or a motion-capture device (known in the industry as a Waldo) worn on the hand of another performer.

Muppet accessories vary widely depending on the particular character. Some have clothing, but lots of Muppets, like Kermit, go au naturel. Miss Piggy is known for her vast wardrobe and had her own costume designer during "The Muppet Show," but many clothed Muppets have a set costume that is a part of their character and rarely changes.

We'll look at the basics of Muppeteering next.

Before Disney purchased the bulk of the Muppets, the place where the Muppets were built was known as simply "the Muppet Workshop." After Disney's purchase, the workshop became a division of the Creature Shop (which builds animatronic puppets and other non-Muppet puppets) and goes by "the Jim Henson Puppet Workshop." Currently the workshop builds puppets for "Sesame Street" as well as other Henson productions.