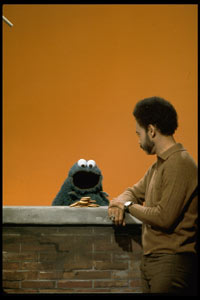 Muppeteering on TV shows and in movies requires special measures because the Muppeteer must be hidden to keep up the illusion. When "Sesame Street" began, Henson came up with the idea of "platforming up" sets whenever possible. This means that the sets are actually 8 to 10 feet in the air so that the Muppeteers stand at their full height with their hands over their heads to operate their Muppets. (Some Muppeteers wear built-up shoes so they're at the same height as their taller colleagues.) The camera is set up to frame only the action of the Muppets, which makes it appear as though they're walking around on the set by themselves.

Keeping everything in perspective can be tricky. Sets that will show only Muppet performers are usually "Muppet-size," while sets that include human actors might be just human-size or a combination of the two. For example, the "backstage" set on "The Muppet Show" has a staircase that is human-size, but the dressing room doors at the top are seven-eighths the size of normal doors [source: Finch]. Sometimes the human actor simply stands on a platform roughly the height of the Muppeteer, so that the human and the Muppet are at the right height to interact. But this isn't always practical, so sometimes sets are built with trenches for the Muppeteers to stand in as they perform, which aren't visible on camera.

In order to see what their Muppets are doing, the Muppeteers have monitors in front of them (or strapped to them). They must always remember that when they move left, the Muppet will move right, and vice versa. If the audio is live (songs are usually prerecorded and lip-synched), the Muppeteer wears a microphone on a headband. Scripts are often taped to the monitor.

Muppets don't always act on raised sets, though. When they venture outside, Muppeteering takes on an entirely new dimension. Often, the Muppeteer has to crouch or lie down to keep out of the camera shot while performing. On the street set of "Sesame Street," Muppeteers sit on small rolling stools. Sometimes a special apparatus is built to accommodate the Muppeteer or the Muppet.

When "The Muppet Movie" hit theaters in 1979, many people were amazed by some of the ways that the Muppets interacted with the real world. In the opening sequence, Kermit sits on a log in his swamp, plays the banjo and sings. The water in the swamp is real, and the camera moves 360 degrees around Kermit, so where's the Muppeteer? Jim Henson operated Kermit through a rubber sleeve while squeezed into a small, cramped chamber built underneath the water. A tube to the surface allowed Henson to breathe.

Other Muppet movies have showed Muppets riding bicycles, driving cars, flying airplanes -- in other words, acting just like people. For the bicycle rides, builders created marionette versions of the Muppets, which were operated from a rigging device suspended above them. (Subsequent bicycle-riding scenes have been accomplished by remote control.) In car-driving scenes, the Muppeteers crouched in the backseat of the car and a little person actually drove the car from the trunk while watching a monitor.

Diving into swimming pools and flying airplanes require a technique known as puppet switching. This means that some Muppets are created as both hand puppets and full-body Muppets, and they can switch between the two depending on the requirements of the scene. When Miss Piggy roller-skated in "The Muppets Take Manhattan" or when Oscar walks around in his trash can on the set of "Sesame Street," they are full-body Muppets performed by little people instead of hand puppets.

Many of the Muppet characters were developed over decades by a core group of Muppeteers. In the next section, we'll take a closer look at Jim Henson and Frank Oz.

In Two Places at Once

Ever wonder why you never saw Kermit and Rowlf the Dog chatting together much on "The Muppet Show"? That's because they were both performed by Jim Henson. The same goes for Fozzie Bear and Miss Piggy, both performed by Frank Oz. When Oscar and Big Bird talk to each other on "Sesame Street," Carroll Spinney usually performs Big Bird live while an assistant performs Oscar. Spinney prerecords Oscar's lines.