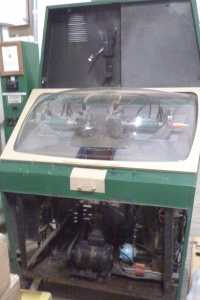 The vintage Mold-A-Rama before its refurbishment and transformation into the Roto-a-Matic
Kirby Kerr/Creative Commons/Flickr, Used Under CC BY-ND 2.0 License

New custom molds are occasionally created for the machines, although it's not an easy undertaking.

Chicago toy store Rotofugi acquired and repurposed a Mold-A-Rama that was originally at the Los Angeles Zoo. They call it the Roto-a-Matic, and it produces a toy called the Helper Dragon from a new custom mold of a sculpture by artist Tim Biskup. You can get one by purchasing a token for $6, putting it in the machine and watching it go, or by ordering the sculpture from the store.

The mold was made by 3-D scanning an original sculpture, designing a mold using CAD (computer-aided design) and having an aluminum cast made of the mold. Rotofugi had planned to regularly feature new designs by artists, but making new molds has proven difficult and expensive, so for now they are simply changing the color each month.

Aside from people buying and refurbishing existing machines, at least one person was inspired to take it a step further. James Durand designed and constructed his own small version of the Mold-A-Rama, dubbed the Mini-Molder, and displayed it at Maker Faire Bay Area in 2014 [sources: AsherMade, Doctrow, Szczys]. It produced a figurine of the Makey robot that's featured on Maker Faire's logo.

Despite the fact that Mold-A-Ramas are practically antiques, they remain popular to this day.

The manufacturing processes behind souvenirs and other plastic baubles that we buy are fascinating, and Mold-A-Rama machines give you a tiny glimpse into one such process. While researching this, I was sad to learn that there was a Mold-A-Rama within 30 miles of me as recently as 2013, but that it's no longer there. But there are still many out in the wild. I will endeavor to locate one during my next Florida trip, at the very least, and bring home a little plastic piece of history.