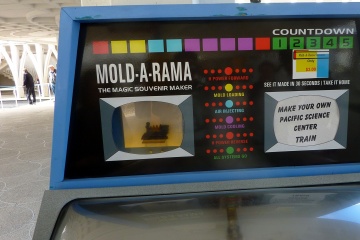 A Mold-A-Rama in action at the Pacific Science Center in Seattle, Washington in 2010.
Cory Doctorow/Creative Commons/Flickr, Used Under CC BY-ND 2.0 License

Although the devices are no longer manufactured, you can still find many of the machines in operation today, thanks in large part to two companies: Replication Devices and Mold-A-Rama Inc. Some smaller companies and individuals also own and operate Mold-A-Ramas.

Replication Devices was founded by Eldin Irwin, who bought dozens of machines from ARA in the early 1960s and sculpted a lot of his own master molds. The company passed down through his family and is currently in the hands of his grandson Tim Striggow and Tim's wife, Denise Striggow. The company operates about 60 or 70 Mold-A-Ramas and owns about 140 along with hundreds of molds. Some of their locations include:

Mold-A-Rama Inc., called the William A. Jones Co. until they officially changed their name in 2011, got into the business in 1971 when William A. Jones bought several machines from Roy Ward. Ward was an employee of the original Mold-A-Rama Inc. (owned by ARA) and had purchased his machines from ARA when they decided to get out of the Mold-A-Rama business. Jones's company expanded when he bought out another franchisee, Paul Nathanson, in the 1980s.

The company is still run by the Jones family, including William A. Jones's sons, Paul and Bill. They operate about 60 machines at various locations, some of which have been clients since the 1960s. Their locations include:

In 1996, the Knoxville Zoo acquired several machines from Dollywood, and they're still in operation producing plastic animals. Collectors like Bob Bollman of Moldville.com also own working Mold-A-Ramas.

The toys from Mold-A-Ramas still in operation these days mostly hover around the $2 mark. The machines cost quite a bit to operate and require lots of maintenance, what with the constant heating and cooling and moving parts, but they are popular attractions in their own right. In 2004, the San Antonio Zoo estimated that they sold about 130,000 figurines per year [source: Garza].

Original figures still fetch anywhere from a few dollars to a few hundred dollars on auction sites like eBay. The originals were made of a plastic that easily broke or melted, so many no longer exist.