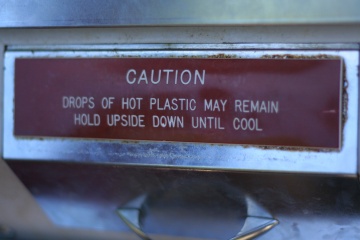 The machines perform injection blow-molding to create figurines while the customer watches through a window. You enter the required amount of money, and the machine springs to life. Through a glass window, you can see two aluminum molds with various tubes and rods attached to them, each the reverse form of one half of a figure, such as an animal or building.

Using hydraulics, the two molds move toward each other until they are pressed together, forming a complete seal except for holes in the bottom area of the mold for input and output of material and air. The mold halves are each hollow, with two holes at the top to allow coolant (either antifreeze or water) to constantly flow through them via attached tubes.

Polyethylene plastic is melted and stored in a holding tank beneath the molds. The molten plastic is pumped into the cavity between the two halves of the two-part mold through one of the holes at the bottom. Once the mold is filled with plastic, compressed air is blown into the cavity between the two mold halves to push the liquid plastic against the cooled walls of the mold. This also pushes the uncooled plastic still at the core out of the mold through a drainage hole and back into the tank, making the figure hollow.

The two halves of the mold then separate, and the finished toy is pushed by a rod into a dispenser slot, where you pick up the slightly warm, newly created statue. The outside is hard enough for handling, but the figure is not entirely hardened at this point. There are labels on some machines telling customers to hold the figure upside down until it is cool.