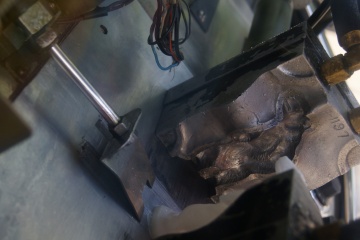 A close-up shot of a Mold-A-Rama mold offers a look at the inside of one half of a bear.
lostonpurpose/Creative Commons/Flickr, Used Under CC BY-ND 2.0 License

The Mold-A-Rama was invented by J.H. Miller (nicknamed Tike) of Illinois. He got into figurine making in the late 1930s when he needed a replacement part for a nativity scene and couldn't find a store that would sell him an individual piece. He made one out of plaster himself, and soon he and his wife began producing plaster figures in their basement.

They founded a company, acquired a factory, hired employees and ended up selling the figures to department stores. They initially created the figures by pouring plaster into rubber molds. But in 1955, the company developed special injection molding machines, the predecessors to Mold-A-Rama, and switched to plastic.

The company went bankrupt in 1959 or 1960. Around that time, Tike developed the idea of a vending machine that would instantly make plastic souvenirs for individual customers. He licensed the idea to the vending machine company Automatic Retailers of America (ARA, now called Aramark) and worked with them to develop the original machines, which premiered at the 1962 Seattle World's Fair. They produced figures such as the Space Needle or a monorail for 50 cents.

Even more machines, perhaps as many as 150, were deployed at the 1964-1965 World's Fair in New York City. There you could get a dinosaur at Sinclair Oil's Dinoland exhibit for 25 cents from a Sinclair branded Mold-A-Rama and Disney figures from Disneyland Toy Factory branded machines. The device hit the 1967 Montreal World's Fair (Expo '67), where attendees could purchase the fair's logo on a maple leaf or figures of the Eiffel Tower or Royal Canadian Mounted Police.

ARA manufactured about 200 of the machines from 1962 to 1969, and they spread across the U.S. to tourist attractions, rest stops and local stores alike. The company decided to get out of the business and sold all their Mold-A-Ramas by 1971.