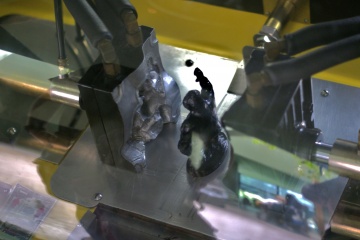 The early molds were made of milled aluminum, but sand-cast aluminum molds were adopted at some point. They're negative molds cast from an original sculpture. Each mold half is made of two pieces, one with the mold on the front and a bowl-like cavity on the back, and the other a back plate that is sealed over the cavity, leaving a hollow area for the coolant. Two holes at the top of each mold piece allow antifreeze or cold water to flow through the mold half. They are cooled to about 25 degrees Fahrenheit (-3.8 degrees Celsius) to allow the plastic against the mold walls to solidify.

The polyethylene plastic is put into the machine's hopper as pellets. They are brought to and kept at temperatures anywhere from 185 to 250 degrees Fahrenheit (85 to 121 Celsius), depending on the melting point of the type of polyethylene. The melting is caused by steam running through coils in the holding tank. The type of plastic used has varied over time and location, and today a more durable blend is used in many of the machines, although Honeywell still makes a lower density polyethylene blend closer to the original that is still used in some Mold-A-Ramas. The St. Paul Como Zoo was reportedly able to move their machines indoors with the animals once they no longer released toxic fumes [source: Nelson].

The machines have to be routinely refilled will plastic pellets, hydraulic fluid and coolant. In the early machines, color was achieved by adding a powdered colorant in with the raw colorless plastic pellets. In the mid-1970s, less messy color-infused plastic pellets were added to the raw plastic instead.

Mold-A-Rama is similar to a 3-D printer in that it makes a plastic bauble quickly on-demand, but it's dissimilar in that it's a mechanical rather than computerized process in which a hard mold is required (rather than a digital 3-D model). Additionally, each machine can produce only one type of figure until the mold is swapped out.