The Figures They Make 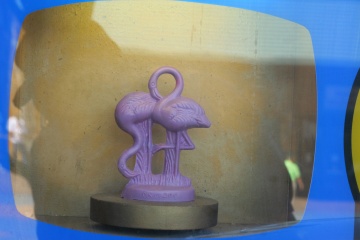 The flamingo figurine is one of many animal molds that were created for Mold-A-Ramas.
Jinx!/Creative Commons/Flickr, Used Under CC BY-ND 2.0 License

It's hard to determine exactly how many unique molds ever existed, but Bill Bollman, who owns a Mold-A-Rama machine and runs the website Moldville.com, estimates approximately 300 designs were created [source: Lammle]. Some were reportedly stolen and sold for scrap in the 1980s, but many still exist.

Machines were often set up to make figures related to their locations: animals for zoos, logos for events such as world fairs, and local landmarks such as the Chicago skyline or Grauman's Chinese Theater. There are also seasonal holiday molds including Santa, a snowman, a reindeer and a holiday tree. Molds exist for lots of animals, dinosaurs, cars, trains, ships, submarines, tanks, busts of presidents and other famous people (even Lawrence Welk), tourist attractions, and NASA craft including Space Lab, the Project Mercury space capsule, the space shuttle and the Titan IIIC missile, among other things. The machines can handle mold plates of various sizes, so the toys range in size, including some coin bank designs.

Disney figures were produced by Mold-A-Rama machines rebranded as the Disneyland Toy Factory. These included Mickey Mouse, Donald Duck, Pluto, Goofy, Peter Pan, Pinocchio, Jiminy Cricket and Br'er Rabbit. The machines were customized with Disney figures posed to look like they were operating the various parts of the machine.

There were other rebranded machines besides Disneyland and Sinclair, including a Universal Studios machine that made a Frankenstein coin bank and a Miami Seaquarium machine that made a Flipper dolphin figurine. Lots of customized signs were made for the machines, some with slots that allowed owners to swap out location- and toy-related text.