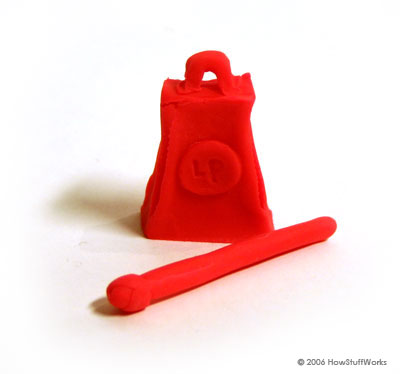 Some kids have a fever that only a Play-Doh cowbell can cure. See more toy pictures.

Like the sound you hear when you shake of a box of LEGO bricks, the smell of Play-Doh m­odeling compound is instantly recognizable to millions of people. It reminds grown-ups of being kids, although sometimes it also reminds them of pulling children's creations out of the carpet. The scent is so memorable and floods people with such nostalgia that there's even a Play-Doh perfume in honor of the dough's 50th birthday.

But fragrance isn't the only thing people remember about Play-Doh compound. There's also its texture -- it's soft, pliable and smooth. It feels moist, not sticky. But if you leave it uncovered overnight, it dries out and hardens.

In this article, you'll learn just why Play-Doh compound acts the way it does. You'll also learn a little about its history and how to make your own dough from stuff in your kitchen.

It all started with wallpaper cleaner. According to the lore, a preschool teacher told her brother-in-law that the modeling clay in her classroom was too hard for children to use. In 1955, he sent her a sample of his company's wallpaper cleaner -- a doughy substance that people rolled up and down their walls to remove soot deposits. It was non-toxic and easy to mold, and it was an instant hit in the classroom. Within a year, the wallpaper cleaner became Play-Doh modeling compound. It officially hit the market in 1956.

The first Play-Doh packages were cardboard cans filled with one-and-a-half pounds of off-white dough. Three-can packs of red, green and blue dough arrived on the scene in 1957, and white dough came a year later. Nine hundred million pounds -- or 2 billion cans -- of Play-Doh compound have been produced in the last 50 years. Factories produce about 95 million cans of the compound every year. More than 6,000 stores in the United States carry the compound, and it's sold in 75 countries.

We'll look at the basic uses for Play-Doh and the toy's treasured recipe in the next section.

If you put it into one big pile, the total amount of Play-Doh compound manufactured since 1956 would weigh about as much as 2,000 Statues of Liberty.

If you extruded the same compound through a Fun Factory, it would make a rope that could stretch from the Earth to the moon about 10 times.