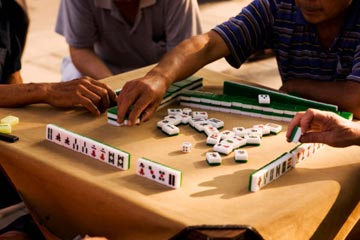 At the start of the game, each player will draw tiles and stack them in a square on the table, resembling city walls.
ULTRA.F/The Image Bank/Getty Images

There are quite a few different Asian and Western styles of mahjong. There are many similarities between the versions, but there are also many differences. Think of mahjong as one language, and each version -- Chinese, Japanese, British or American -- is a unique dialect of that language. Many aspects can be understood by anyone who speaks "mahjong," but to intelligently play a specific version you have to understand the rules and peculiarities of that version, or "dialect." Here, we'll deal mainly with the rules of the American version.

Every game of mahjong begins with each of the four players (there must be no more or no less than this) rolling dice. The player who rolls the highest number will represent the East wind and will be the dealer. The player with the next higher number will represent the South wind, while the next takes the West wind, and the lowest number takes the North wind. Each player (wind) falls in order counter-clockwise from the East player.

The tiles are placed facedown on the table and mixed to ensure they are randomly shuffled. Each player will select 38 tiles and create a row that is 19 tiles long and two tiles high. The four rows are then pushed to the center of the table to create an empty square, resembling walls surrounding an open field. The dealer will throw a pair of dice into the empty space. The number the dice turns up determines the breaking point of the wall. The dealer will count that number from the right end of the 19 stacks comprising the East wall and push the remaining left-hand tiles in the wall forward to create a break. The dealer then takes two stacks (four tiles) from the left-hand side after the break and sets them facedown, usually behind his or her wall. The other players follow suit. The process is repeated two more times the same way, then once more with the dealer taking two more tiles, and each of the other players taking just one each. This should give the dealer 14 tiles and the other players 13 each in front of them.

Then, the Charleston is performed when each player passes three tiles to the player on his or her right, then to the player opposite him or her, and finally to the player on the left. The Charleston occurs only in the American version of mahjong, and is one of the two main differences from the official Chinese version (along with the inclusion of joker tiles).

Once these preliminaries have been performed, new tiles can be drawn from the wall while previously received tiles can be discarded. The winner is the player who can first put together a complete hand that contains combinations of two (an eye), three (pung), four (kong) or five (quint) of a kind totaling 14 tiles.

To find out how to increase your odds of winning a game of mahjong, read the next page on strategies and gameplay.