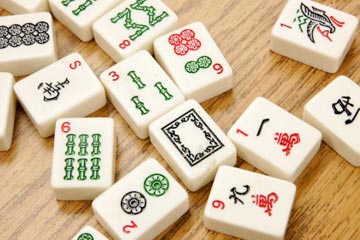 Mahjong sets are made up of tiles or, sometimes, cards. Traditionally, the tiles were made of bone. In fact, it is said that in the early 20th century the demand for game tiles in Asia was so high that cow bone was frequently shipped there from companies in Kansas City and Chicago to keep up with the mahjong craze [source: Mahjong Info]. Today, the tiles are made with more modern materials such as plastic and nylon, but one thing that hasn't changed about the tiles are the symbols they bear.

The symbols aren't entirely universal from version to version -- some tile sets may contain different colors or designs --- but they do follow a fairly specific formula of sets and suits. The sheer number of tiles in a mahjong game may seem overwhelming at first, and they vary per version, so we'll break it down for you. The tiles come in three categories: suits, honor and flowers.

There are three suits: bamboos (called "bam" in the American version), stones (called "dot" in the American version) and characters (called "crak" in the American version) [source: Sandberg]. Each suit contains four sets of nine tiles, with each tile representing a number one through nine. So the 36 tiles in the bamboo suit use bamboo images to count to nine -- the four No. 1 tiles each have one bamboo stick image, the four No. 2 tiles each contain the image of two bamboo sticks, and so on. The stone, or dot, suit follows the same format but uses circles to represent the numbers. Each of the numbered tiles in the characters, or crak, suit contains the Chinese character for each number. The western number can usually be found in the left-hand corner of the character tiles.

The honor category contains wind and dragon tiles. There are four sets of four wind tiles, representing the east, south, west and north winds, and four sets of three dragon tiles, representing red, green and white dragons. The flowers contain a set of four flowers, which each represent one of the winds -- plum (east wind), orchid (south wind), chrysanthemum (west wind) and bamboo (north wind) -- and a set of the four seasons (spring, summer, fall and winter) in which of the four flowers bloom. The eight total tiles in the flowers set are usually considered bonus tiles. This equals 144 tiles in all. The American version of mahjong also contains eight joker tiles, which can be used to replace any other tiles during the game, giving it a total of 152 tiles.

In addition to the game tiles, most mahjong sets include tiles or chips for scoring, and indicators for each of the four players' prevailing wind (as each player represents the east, south, west or north wind). There is also a pair of (or set of three) dice, which determine the order of play. Additional equipment is minimal and, at most, you'll need tools such as racks for holding tiles and chips. Mahjong is typically played at a table so that the tiles can stack easily and securely, and so that each player has his or her own side from which to play.

To find out how to use these tiles in a game of mahjong, read the next section on mahjong rules.