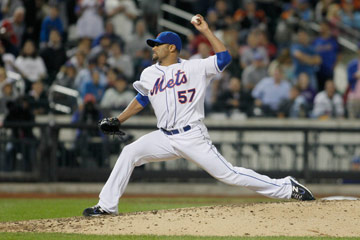 Johan Santana of the New York Mets fires a pitch in June 2012, on his way to a no-hitter against the St. Louis Cardinals. See more sports pictures.
Mike Stobe/Getty Images

In the late 19th century, several entrepreneurs tried to launch professional baseball leagues, only to fold under poor leadership, shaky financial management, and the ever-present problem of gambling. Until the late 1860s, competitive baseball was mostly an amateur's game. Every large and small town had its team (or several teams) and players were recruited from the ranks of local carpenters, teachers and morticians.

The first paid professional league was the National Association of Professional Base Ball Players, launched in 1871 with nine teams from big cities across the East Coast and Midwest. The National Association, as it was known, only lasted five seasons before collapsing under allegations of fixed games and a virtual monopoly on wins by the Boston Red Stockings [source: Miklich].

In February of 1876, the owner of the Chicago White Stockings, William Hulbert, called a closed doors meeting in New York City, where he proposed the creation of a new league that would root out gambling, shift power away from the players, and attract a wealthier fan base. He called it the National League. Hulbert's rules for the new league would ban alcohol at games, drunken players and fans, cursing, games on Sunday -- and would require a ticket price of 50 cents, twice the going rate of most professional baseball games [source: Nemec].

How did the National League fare at first? Find out on the next page.

The Start of the National League

The first National League season opened on April 22, 1876 with eight teams, including a few holdovers from the National Association. Hulbert's White Stockings stole away some of the best National Association players and quickly became the new league's powerhouse. Chicago won 52 of its 66 games in the 1876 season. The last place Cincinnati Red Stockings went 9–56 [source: Nemec].

The National League (NL) introduced some new rules to the game that survive today. In the NL, batters had to remain in the batter's box when swinging, and runners could take an extra base if a fielder obstructed their path. One rule that didn't change initially was the prohibition against a called third strike. Umpires had to warn a player who failed to swing at a "good ball" that would have been the third strike. If the player persisted, then he could be called out [source: Nemec].

The American Association, a rival professional league, launched in 1882, appealing to a more working class crowd with 25-cent admissions and alcohol at games. The champions of the National League and American Association played each other in 1882 in what some call the first "World Series." In 1891, the two rival leagues merged into a single 12-team National League, also known as the "Senior Circuit" [source: Miklich].

The American League (AL), known as the "Junior Circuit," formed in 1901 and its Boston Pilgrims won the first official World Series in 1903 [source: Major League Baseball]. In the history of the World Series, the AL leads with 62 wins to 43. The biggest contributor to the AL's dominance is the New York Yankees with 27 World Series titles. In distant second come the NL's St. Louis Cardinals with 11 titles [source: MLB.com].

Today, there are 16 teams in the National League, although that number will reduce to 15 when the Houston Astros switch to the AL in 2013. The only major difference between AL and NL baseball is the designated hitter rule adopted by the AL in 1973 [source: McKelvey]. (The rule allows AL teams to substitute a batter for the pitcher during at-bats, since pitchers are typically such weak hitters.) National League teams complain that the rule gives the AL squads an unfair advantage in the World Series when the DL rule is in effect at AL ballparks. Despite pressure to adopt the rule, there is no talk among NL managers to change course [source: Verducci].

Now let's take a closer look at those original eight teams that joined the fledgling National League back in 1876. 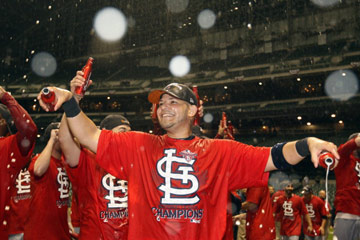 When William Hulbert created the National League in 1876, he took six teams from the dying National Association and added two more squads to create the "Classic Eight" NL clubs:

The Chicago White Stockings, owned by Hulbert and managed by Hall-of-Fame pitcher A.G. Spalding, were the dominant force in the early years of the National League, winning six of the first 11 league titles [source: Cubs]. Because of their young lineup in the early 1900s, the White Stockings earned the nickname the "Cubs," which became the team's official name in 1907 [source: Cubs].

The Cubs are one of only two original NL teams that still exist today. The other is the Boston Red Stockings, which underwent several name changes (Red Caps, Beaneaters and Doves) before settling on the Boston Braves in 1912 [source: Braves]. In 1953, the Braves moved to Milwaukee, where Hank Aaron led the team to a World Series title in 1957. In 1966, the Braves moved yet again, this time to Atlanta, where they grew to prominence in the 1990s, winning Atlanta's first World Series in 1995.

The rest of the original eight NL clubs folded under financial problems or were expelled from the upstart league. The Philadelphia Athletics and New York Mutuals, which both fared poorly in the new league, refused to make a road trip out West and were summarily dropped after the first NL season. The Hartford Dark Blues had trouble selling tickets in Connecticut, so the team moved to New York in 1877, becoming the geographically confusing Brooklyn Hartfords [source: Arcidiacono]. The Hartfords closed shop after just one season.

For lots more information on baseball history, including the most important rule changes in the evolution of the game, explore the links on the next page.

Have you ever invited someone from another country to a professional baseball game? You might as well be buying them a ticket to Mars. Americans love baseball. We love the arcane rules, the box scores, the overpriced hot dogs and the seventh inning stretch. But try to explain any of this to your foreign friend and he will nod politely while mentally blocking out your detailed deconstruction of the infield fly rule. Yes, it's a strange game, but I love the fact that there are still two "leagues" in Major League Baseball and that fans can still get worked up enough to dislike the other league for its designated hitter rule or its oddly proportioned ballparks.