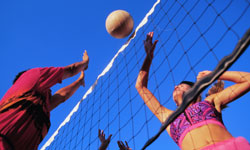 Have you ever played mintonette? The game, invented in 1895, involved teams that took turns volleying a ball over a raised tennis net. Think this sounds suspiciously like volleyball? You're absolutely right.

The term mintonette, which referred to the net, was short-lived. During an exhibition game, a spectator voiced the opinion that "volleyball" was an apt descriptor and the name stuck. So did the game itself. Today, volleyball is played by 46 million Americans. It's become a popular international sport with legions of loyal fans, including a large following during Olympic competitions.

Even though the game has reached professional status, volleyball is still perfect for backyard play. Whether you're a traditionalist who prefers a regulation net and by-the-book rules, or a fledgling amateur who doesn't know the difference between a dink or a bump, here are five volleyball variations that will make you want to head straight to the net.

Sepak takraw is a volleyball-like game in which only players' legs, heads and torsos can be used to hit a ball over the net. Sepak takraw is a mash-up of the Malay term for "kick" and the Thai word for the rattan ball used during play, "takraw." It's one of the earliest recorded games that still has a modern following, dating back to the 11th century in Philippines, Indonesia and Laos.

While sepak takraw is wildly popular throughout Asia (and extremely competitive), it can easily be adapted to backyard play. Three players on each side of the net face off. After one player kicks the ball over the net, the opposing team can hit the ball up to three times before it has to be returned over the net. If you don't have a traditional rattan ball, you could easily use a volleyball instead. In addition, the game can be adapted to more or fewer players [source: International Sepaktakraw Federation]. 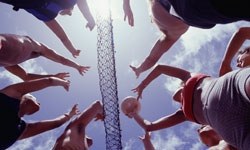 The rules of this backyard volleyball variation are simple: Each player must remain seated on the ground at all times. And if you're like most players, you'll spend most of your time sitting -- unless you're diving after the ball, of course. In that case, you can leave the ground briefly, but must quickly make contact again with your rear end, torso or shoulders. It's challenging to reach for and hit the ball, and playing volleyball in a seated position requires a healthy measure of strength and stamina.

The game was invented in the 1950s, when Danish athletes combined volleyball and sitzbal, a German ball game played while sitting. Seated volleyball is now an official Olympic sport and is played around the globe [source: London 2012]. 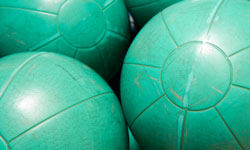 Can you image hauling one of these over a volleyball net?
Wesley Hitt/Photographer's Choice RF/Getty Images

Personal trainers use medicine balls to turn clients' flab into rock-hard abs, but can you imagine hefting a medicine ball over a volleyball net? That's exactly what players do during a game of Hooverball. This backyard variation on volleyball was once the No. 1 White House sport, thanks to President Herbert Hoover's love for the game. It was invented in 1928 by a White House physician to keep Hoover at his fighting weight.

If you'd like to reenact a rousing match of Hooverball in your backyard, you'll need a six-pound medicine ball, a few friends and a volleyball net. A player on each team, designated as the server, will throw the ball over the net. An opponent must catch and return the ball in one motion. The side that fails to catch the ball loses the point [source: Herbert Hoover Presidential Library Association].

If you're really committed to backyard fun, it may be time to build a sand volleyball court. Traditional outdoor volleyball courts are typically 60 feet by 30 feet (18.3 meters by 9.1 meters) -- although you can modify the size to suit your space. If you're not interested in hiring a contractor to install a drainage system, excavate a flat area and set permanent net poles in concrete, you could just opt to add the good stuff: sand.

After putting down a layer of gravel to aid drainage, top it with landscape fabric and two feet (0.7 meters) of beach-quality sand. The fabric will keep the sand from drifting downward, through the gravel, and into the soil below [source: Chavez]. Just think: you and your friends can reenact the iconic beach volleyball scene from the classic '80s movie, "Top Gun," whenever the mood strikes.

Author's Note: 5 Volleyball Variations to Play in Your Backyard

I can't watch (or play, certainly) a volleyball game without keeping my knees flexed. It was the No. 1 thing my junior high coach preached, and it stuck: You have to be ready to move. And if you stand there with your knees locked, it will be far too late by the time your legs get the message to move.

Of course, now that I'm ready to try out these variations of backyard volleyball (some of which I didn't even know existed until I researched this article), I'll have other techniques to consider, too, like Rockette-style kicks to volley the ball.