I Can Has Words? 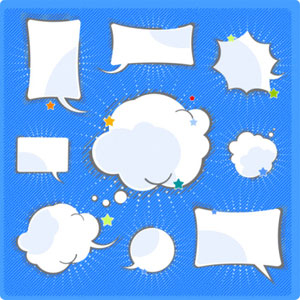 Both comic books and graphic novels use ubiquitous speech and thought balloons to convey dialogue and inner thoughts.
iStockphoto/Thinkstock

Egyptians had their hieroglyphics, and prehistoric humans, their cave drawings. Although actual written words don't appear often in these contexts, the symbols and drawings held great meaning to the people living in those times. People really needed pictures to communicate ideas and stories.

As human language continued to advance, words, and thus reading, was mostly for scholars and elites. A few hundred years ago, though, mechanization of labor processes helped free up a bit of time for even the working classes, who until then had often used pictures to share ideas in printed media. For instance, political cartoons, in which pictures predominated over words, were featured in newspapers and almanacs used illustrations to help viewers to quickly get the gist of an idea.

In 1837, Swiss artist and writer Rodolphe Topffer published an English version of "The Adventures of Mr. Obadiah Oldbuck," which is often considered one of the first comics ever created. Oldbuck featured some of the hallmarks that define comics, such as a compelling synergy of text and cartoon pictures, as well as panel borders. These elements helped move the narrative forward.

About 100 years later, comics exploded in popularity, especially in North America. From the late 1930s to the 1950s, comic books took on their familiar format, including their short length, the introduction of the superhero paradigm, and characters such as Superman and Batman, who would become lasting worldwide celebrities.

World War II, in particular, helped fuel the popularity of comics, especially among American military men. Comics provided them with cheap entertainment abroad, and stereotyped icons such as Superman, who always, always triumphed over evil, gave them a morale boost, too.

As WWII drew to a close, the black-and-white, good-versus-evil type of superhero comics lost some of their luster and popularity. To replace those tired themes, publishers began releasing comics with other subjects, such as horror, crime, Western and science fiction.

The number of pages contained in comics, though, remained fairly static until 1950. It was then that St. John Publications unveiled a 128-page comic called "It Rhymes with Lust," which the company billed as a full-length picture novel. This title was a purposeful attempt by the author, Arnold Drake, and the illustrator, Leslie Waller, to tie sophisticated writing with equally refined drawn art. It was, in short, one of the first deliberate attempts to make a graphic novel.

"It Rhymes with Lust" was very successful, but it didn't immediately lead to a surge of graphic novels, in part because it arrived at a time of conflict and tumult in the industry. As you'll discover on the next page, comics and picture novels were about to become scorned and demonized by both literary snobs and federal authorities.