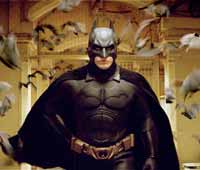 For years, citizens of Gotham City have relied on the masked avenger known as Batman to protect them from the schemes of numerous madmen, including the Joker, the Scarecrow and Mister Freeze. But Batman's efforts to defend the city haven't been without controversy. Critics have accused him of everything from endangering the populous to behaving like a madman. Is it possible that Gotham's greatest champion, like so many of the inmates he's sent to Arkham Asylum, is a psychopath as well?

People who are considered to be psychopaths or sociopaths generally suffer from antisocial personality disorder. This is a psychiatric condition characterized by chronic behavior that manipulates, exploits or violates the rights of others. This behavior is often criminal.

In order to properly speculate about whether Batman suffers from antisocial personality disorder, you must first look at his basic behavior. Batman costumes himself and engages in vigilante activities to curtail the Gotham criminal element. He often uses physical force and weapons to subdue those he deems lawbreakers, but doesn't fatally injure the people he apprehends. Batman is extremely secretive and generally works alone, though he's rumored to have worked alongside the Gotham police department. Batman shields his features in order to avoid identification and is most likely a resident of Gotham City himself.

That said, do Batman's activities make him a candidate for antisocial personality disorder? Let's take a look at the symptoms and see how Batman relates:

By applying these guidelines to the information that's readily available on Batman, it appears that he exhibits only two symptoms of the disorder. In other words, he doesn't meet the criteria to be called a sociopath. Of course, without the knowledge of his civilian identity and the cooperation of the Batman himself, it's impossible to validate the accuracy of this profile. Regardless of whether the Batman persona is a sociopath, his secret identity may be.

You can learn more about psychiatric disorders, vigilante justice and related topics by following the links on the next page.

How Professional Clowns Work
'The Last Supper': The Masterpiece Leonardo Didn't Want to Paint
Exploring the Forgotten Structures of Paris