Coming to Grips With Different Throws 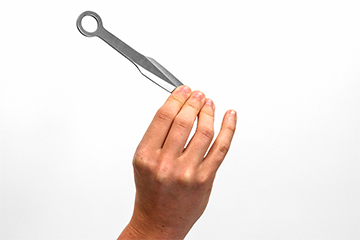 Our knife thrower is sporting a pinch grip.
© D. Fagan/HowStuffWorks

Just like any other throw, an effective knife throw requires developing an effective grip and a sense of what your wrist, shoulder and elbow ought to be doing throughout the motion.

For a handle throw, grip the knife like a hatchet, with your fingers curled around and your thumb pressed near the crosspiece. Some prefer to place the thumb along the top of handle, which slows rotation and lets you finesse throwing distance [sources: AKTA; McEvoy].

For a blade throw, hold the blade edge-down, with the sharp part away from your palm. Now line up your first through third fingers on the side opposite your thumb and curl your pinkie out of the way. You should have about an inch of blade sticking out past your fingers toward your wrist [source: McEvoy]. Note that, aside from finger curling, your grip, throw and release remains the same as during the handle throw [source: Janich]. This means that you don't have to learn two completely different sets of biomechanics for the two throw types.

No-spin techniques also exist, although they are less common in competition. The advantage of such techniques is that, because they do not involve spin, distance is less of a factor. However, some knife throwers argue that these methods are more tiring and harder on the joints [source: Thiel]. Your mileage may vary.

There are three main approaches to no-spin throwing. All three use the so-called "finger of God" grip, in which the thrower lays an index finger along the knife's spine to helps eliminate rotation [source: Thiel].

One technique, sometimes called mumyouan style, derives from the martial arts of the bo-shuriken, a Japanese throwing spike. It involves locking your wrist and releasing the knife with something like a push or shot-put motion. Another, Thorn Style, resembles a spear-throwing action, with arm and elbow swung well away from the body and a lot of wrist action on the release. It works best with large weapons like swords. Finally, Russian style throwing consists of a more compact motion, with the elbow held in near the body. After cocking the knife behind the ear, a Russian thrower makes a low, whip-crack motion while coming around and releasing the knife [source: Thiel].

Whatever style you choose, remember: Aim small, miss small. Try to hit as small a target as you can, then see where the knife goes and make small corrections. Adjust one element at a time, whether it's distance, grip or release point, but always try to keep the force of your throw constant to limit your variables. With a bit of practice, you'll be impressing your friends and frightening your neighbors in no time.

I'm sure that, like many other little boys, I probably tried to throw a knife at some point in my childhood. I don't remember it well, but I do recall a sense of frustration at the mad, wobbly and perilous path it took. Back then, we didn't have the Internet to anonymously consult or YouTube videos to reassure us such things were possible outside of the pages of comics. It's probably just as well.