The Physics of Knife Throwing 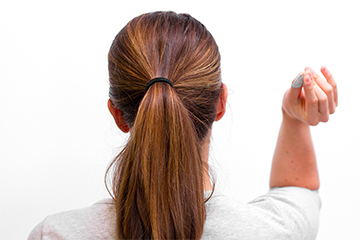 HowStuffWorks's very own knife thrower gets ready to let fly. She's gripping the knife by the handle.
© D. Fagan/HowStuffWorks

Whether you throw by handle or blade, whether your preferred missile is a knife, ax, tomahawk or some other pointy object, the basic rule of throwing is the same: Grip the light end and throw heavy-end first. Just as when a juggler spins a set of clubs skyward, this arrangement creates a natural motion that encourages spin and stability [source: Janich].

As you swing your arm toward the release point, you impart two kinds of motion to the knife: First, you move it in a partial circle around your shoulder joint; second, you create spin. How? Because velocity = distance / time. By the time you've completed your swing, the outer end of the knife has moved a greater distance than the end that you are gripping, but in the same amount of time. This differential motion imparts spin, which is influenced by center of mass, which is why knife balance is so crucial.

What path does the knife take? Well, physics tells us that a revolving object that suddenly breaks free will continue to move in a straight line tangential to the point at which it was released. For this reason, the release point for a knife throw occurs much earlier than most people expect -- at the top of the arc, not at your arm full extension [source: Thiel]. If you let go at the end of your throw, the knife would instead fly into the ground.

Of course, this is an idealized case, and the actual arc, motion and release point will depend on your throwing style.

Once released, the knife flies toward the target at a speed averaging between 26 and 30 mph (42 to 48 kph) [source: Adamovich]. If you've brought all the throwing elements together properly, then the knife completes its rotation just as the business end points perpendicular to the target.

Now the weight of the knife comes into play. Since momentum is proportional to velocity and mass, a knife with some properly proportioned heft considerably improves your odds of sticking in the target. A sharp point is essential, too, because pressure, which drives the knife into the wood, is inversely proportional to the area of contact. If you've ever had a cat wake you in the morning by putting all of its weight on one kidney-punching paw, then you are familiar with this concept. This is a good thing, because it's going to help you choose your weapon.