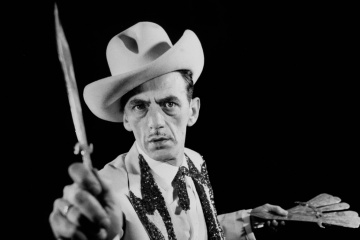 "Shouldn't have brought a knife to a gun fight," growled the ill-tempered man in the black hat, taking up a position opposite the square-jawed stranger.

The stranger said nothing, content to allow the glint of the sun off his blade to answer for him. But a pang of doubt, detectable only by the visible grinding of his jaw muscles, was beginning to creep in. How had he gotten himself into this? Sure, he could throw faster than that evil cattle baron could slap leather, but the distance, the aim and the technique would have to be just right. And an underarm no-spin throw wasn't exactly known for its accuracy ...

"Oh well," he muttered under his breath as he curled the weapon into his palm. "It worked for James Coburn in 'The Magnificent Seven' ..."

Knives. They're among our oldest tools and weapons, but they don't exactly sail through the air like an arrow or a spear. Even knives balanced for throwing seem to fly on the edge of chaos. Perhaps that's why they fascinate us, why action heroes in movies like "The Expendables" and "The Hunger Games" always seem to be able to throw them with deadly effect, and why the impalement act -- the ironically named performance art of throwing knives near a human target -- has held audiences spellbound for centuries.

A knife is a practical item to which we're all likely to have easy access, so learning how to throw one is a fun and handy way to extend its usefulness. Knife throwing can also provide a rewarding pastime, one that we can enjoy by ourselves or as participants in clubs or competitions. All it takes: a knife balanced for throwing and a good target. Oh, and one more thing: practice.

Lots and lots of practice.

An effective throw involves balancing several factors, including distance to target; knife length, weight and balance; and knife type. But technique also varies from person to person; it's a function of size, stance and other throw mechanics. For every rule of thumb, you're bound to find a thrower who successfully breaks it. That said, if you have the patience, we have the information you need to get started with the most success and least frustration possible.