A Brief History of Impalement 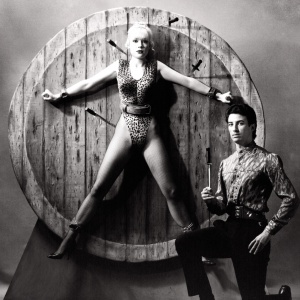 A carnival knife thrower and his comely assistant pose by the wheel of death.
Robert Mizono/Photolibrary/Getty Images

Knives have been around longer than modern humans have. They were among the first tools our hominid ancestors produced, and we have since developed them into specialized versions suited to an endless variety of tasks, from hacking through jungle to performing eye surgery. At times, knives have represented freedom and independence, the ability to survive [source: Ewalt]. But they've never lost their sense of danger.

One of the more interesting examples of this violent versatility is the wide variety of throwing knives found among African cultures. From the Sudan down to the Gabon and the Congo Basin, blades for throwing assume a variety of surprising shapes and sizes. Some measure as much as 2.5 feet (0.76 meters) across; many are curved, or sport long handles; some look like police batons, while others resemble large, drunken throwing stars, sickles or the heads of polearms. They feature multiple nasty edges designed to ruin the legs of men and horses, and warriors throw them using a wrist-snapping sidearm that spins them in a lateral arc toward their targets [source: McNaughton].

No one can say when people first started throwing knives. Likely, it was sometime after blades assumed a more balanced, single-edged form around 5,000 years ago [source: Ewalt]. We like to imagine the activity began, as so many do, from boredom. Probably, tossing a knife at the ground or a nearby tree stump took the edge off fireside boredom or provided a way to cull the rodent population. From there, it may have advanced via a series of competitions or challenges into a way for warriors or hunters to display their skills.

This is mostly speculation, but we like to think that the decision to cross over into William Tell territory was likely based on a dare (we refer doubting readers to YouTube and the Darwin Awards). Whatever its origins, the impalement act has entertained crowds at circuses and Wild West shows since at least the late 1800s. The danger and skill on display in such acts, especially those involving a blindfolded thrower or a comely assistant strapped to the spinning "wheel of death," have caused many to suspect fakery is afoot [source: Hart]. But in truth, although stagecraft tricks exist for simulating knife throws, most impalement acts are perilously real [source: Esquire].

So how do they manage to never hit their assistants? Well, as world-record knife thrower David Adamovich told Big Think, "They last a lot longer if you throw around them than if you throw at them." Even so, throws do sometimes go astray [sources: Adamovich; Esquire]. Humans, after all, are fallible, and physics is unforgiving.