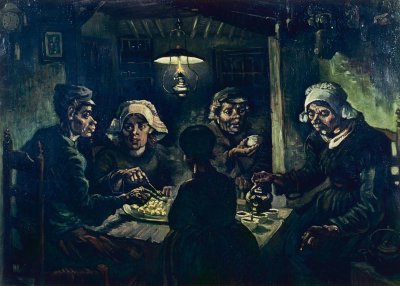 Vincent van Gogh's The Potato Eaters is an  (32-1/4 x 45 inches) that is housed in the Van Gogh Museum in Amsterdam. See more pictures of van Gogh paintings.

The early paintings of Vincent van Gogh reflected the painter's innate command of color, intense effort and self-discipline, and desire to depict nature and working-class subjects.

At the age of 27, Vincent wrote to his brother Theo of his burning desire to change the course of his life. He had spent his youth in the pursuit of a rewarding vocation, but every one of his attempts met with failure. Recalling the enthusiasm for paintings that he had enjoyed during his years as an art dealer, he confessed, "I am often homesick for that land of pictures."

But rather than return to the profession that would once again surround him with works of art, he now planned to rely upon his own initiative and become a painter.

Vincent van Gogh spent the following years studying disciplined drawing in The Hague and practicing plein air painting -- painting outside -- to capture the fleeting effects of natural light and atmosphere. Later, van Gogh studied the working poor as subjects while living with his parents in Neunen, the Netherlands.

The early paintings of Vincent van Gogh represent an artist discovering his passion. The following pages take you to these paintings.

When creating his early works, Vincent van Gogh often painted outside, insisting on capturing nature in its own element. Take a look at View of the Sea at Scheveningen, the painting in the next page, for an example.