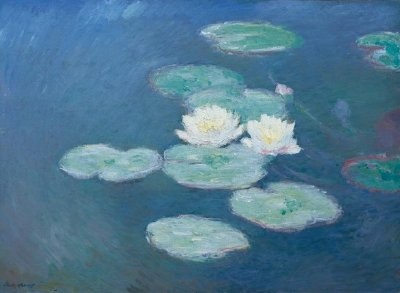 In the spring of 1883, Claude Monet decided it was time to find a permanent residence for his family and he selected the village of Giverny. It was small and relatively untouched by industry, and the region had a picturesque appeal. Gentle rolling hills rose to the north, while to the south there were cultivated fields of wheat and poppies as well as meadows covered with wildflowers and irises.

Monet found a large house to rent on the southern outskirts of the village. He signed a long-term lease and transported the family's belongings by river to Giverny in his studio boat. By June, Monet and his family were settled in their new home. Late in the year, he resumed his travels, but it was evident wherever he went he now missed his home as well as his family. In February 1884, he wrote to Alice from Bordighera: "If I am happy to work in this beautiful area, my heart is always at Giverny."

Monet's passion for gardening dated back to his young married life in Argenteuil. He found the work relaxing, and he often claimed he grew flowers to always have a natural subject to paint. Monet spent most of his summers in Giverny, setting up his easel in the surrounding fields of crops and flowers and then tending the garden at his leisure.

By 1890, Monet was able to purchase the house, and he undertook a far more extensive renovation of his garden. With its array of natural colors that changed from the cool blues and violets and pale yellows of spring irises to the hot oranges and reds of the late summer dahlias, the garden was composed the way Monet composed his paintings, allowing the natural visual sensations to guide his aesthetic expression.

Monet purchased an additional parcel of land adjacent to his property in February 1893. Located near a small branch off the Epte River, it had a pond in the center surrounded by marshlands. The following summer Monet added water lilies to the pond's surface, and, in 1895, he had a small arched Japanese bridge built to span the western end of the pond. As with his flower garden, he patiently watched his water garden transform and mature.

Around 1897, Monet painted a small set of studies of the pale lilies floating on the dark water. Feeling he had not captured the effect he desired, Monet tried again in July 1899. Over the course of the summer, he worked on 12 canvases, each depicting a view of his pond looking westward toward the Japanese bridge.

Monet returned to Giverny in April 1890 and put the finishing touches on the remaining canvases as he waited for the warm weather. Over the summer, he painted six more views of the Japanese bridge. In place of the crisp, scintillating touch of the paintings of the previous year, he now handled his brush with more freedom and confidence. The cool, pear-like tonality of the paintings of 1899 was now enriched with the warmth of red and violet hues.

Monet was an artist who was passionate about cultivating and painting the beauty around him. To learn more about his flower and water garden works, see Claude Monet's paintings from Giverny:

To see the blue and violet iris beds that floated like a haze around Claude Monet's estate, continue to The Artist's Garden at Giverny in the next section.