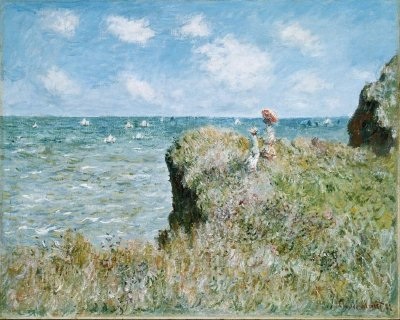 Critic Georges Lecomte once described Claude Monet as "the epic poet of nature...full of enthusiasm, indulgence, and serenity, extracting from nature all of its joy." This pursuit to understand nature through art is clearly visible in Monet's works from 1879 to 1886.

During the first stages of his career, Monet concentrated on nature in familiar sites. He returned to his boyhood home in Le Havre and set up his easel where he first painted the sea. But by the 1880s, Monet felt compelled to turn his attention to new sites and new challenges. Over the course of the decade, he traveled to select destinations, traversing regions on foot and immersing himself for months in solitary work.

Monet painted relentlessly, often in brutal weather conditions, to test his physical endurance as well as his powers of observation. From 1882 through 1886 Monet made annual winter journeys to the villages of Etretat, Dieppe, and Pourville along the Channel coast of Normandy. He selected sites along the jagged shoreline and set up his easel looking out over the seas from a high point of view.

In 1883, Monet traveled with friend Pierre Auguste Renoir to the Riviera resort town of Bordighera. Here Monet found an alternative vision to the cold northern light, and an unprecedented challenge: the radiant colors of the southern Mediterranean. For three months, Monet worked from dawn to dusk, painting on four canvases at once, aiming to capture the high color he saw everywhere around him.

In 1886, Monet went to the coast of Brittany, drawn to the rugged terrain and jagged rock formations that jutted up out of the sea. He defined a desire to test himself by using darker tones in contrast to his usual pale palette. To do so, he braved the winds and rains of the harsh sea squalls to capture the deeper tones of the rocks when they were wet.

For all his daring and endurance, Monet won much admiration and also transcended his reputation as an Impressionist.

To learn more about how Monet became the "epic poet of nature," see these Claude Monet paintings from 1879-1886:

Claude Monet's Impressionist fascination with nature begins with a wintry, snow-clad landscape. Learn about Monet's Church at Vétheuil in the next section.