by Gerlinda Grimes
Prev NEXT
5

The Curse of Captain Eddie 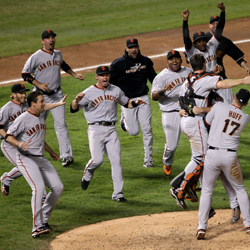 In 1918, New York Giants player "Captain Eddie" Grant became the first major league ball player to die in World War I. The team honored him with a commemorative plaque at center field in New York's Polo Grounds in New York. Overseen by Captain Eddie, the Giants went on to win the World Series in 1921 and then again in '22, '33 and '54.

Then, in 1957, unhappy with the diminishing physical condition of the Polo Grounds, the Giants relocated to San Francisco. Captain Eddie's plaque disappeared. Fans stormed the field after the team's last game at the Polo Grounds, and some say the plaque was looted. Others claim it was simply lost in the move. In any case, the Giants seemed to lose their mojo after they made the move to San Francisco. As decades passed with no further World Series wins, a legend sprung up that Captain Eddie had cursed the Giants.

Finally, team owner Peter Magowan ordered a replacement plaque. It was installed in AT&T Stadium in 2006, and in 2010, the Giants won the World Series. Reinstalling the plaque may have reversed the curse of Captain Eddie, but for close to a century, it looked like nothing would save the Red Sox from their curse. Curious? Read on.