by Gerlinda Grimes
Prev NEXT
7

The Curse of the Colonel 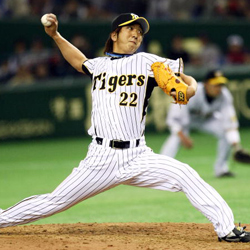 Pitching for a cursed team? Kyuji Fujikawa of the Hanshin Tigers pitches in a preseason game against the Boston Red Sox in 2008.
Junko Kimura/Sport/Getty Images

Most of the curses on our list are the result of greed, disrespect or questionable decision-making on the part of baseball's players, coaches or team owners. Blame for the curse of the Colonel, however, lies squarely with the fans.

Almost 30 years ago, a team called the Hanshin Tigers won the Japan Series in an upset victory over the Seibu Lions. Exuberant fans took to the streets to celebrate. The party ended up on a bridge overlooking a local canal, where supporters plunged into the river one by one, each man shouting each player's name as he leapt from the bridge. It so happened that the number of players surpassed the number of willing jumpers. As luck would have it, there was a life-size statue of Colonel Sanders standing in front of a nearby Kentucky Fried Chicken restaurant. The crowd seized it and tossed it into the river in honor of MVP Randy Bass. Thus began a losing streak that continues to this day.

In 2009, a body was spotted in the canal, and divers were sent in to recover it. Instead of retrieving a corpse, however, it turned out that they had rescued the torso of the desecrated Colonel Sanders statue. Fans were hopeful that recovering the statue would break the curse. No such luck. The Tigers' losing streak continues -- for now.

Fans may be to blame for the curse of the Colonel. In our next segment, however, it's a memorial statue that held the grudge.