What Falls Below the Line 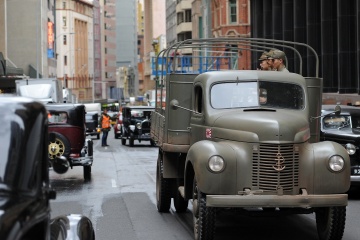 The amount of money spent on extras, props and set rentals can vary during filming.
GREG WOOD/AFP/Getty Images

Perhaps the easiest way to define below-the-line expenses is to focus on what's not included in the category. Most expenses related to creative talent, such as actor salaries and the cost of directors and producers, fall firmly above the line. Any fees associated with screenwriting or securing the rights to a screenplay are also above the line. Once these costs are out of the way, virtually every other dollar spent making a movie is accounted for below the line.

So what kind of spending is included in below the line expenses? Start with salaries. Other than the millions paid to the cast, nearly every salary in the budget falls below the line. This includes the cost of any assistant directors, art and special effects folks, set designers, lighting technicians, cameramen, sound people and costume crew. Wardrobe, hair and makeup costs also belong to this category, as do any costs associated with "casual talent," or extras.

Beyond salaries, below-the-line costs also include the costs of production. This could include money spent on sets and props, music licensing and composition fees, trailers, craft services, publicity, travel and insurance. Basically, any money that isn't going to an actor, producer, director or screenwriter can be categorized as a below-the-line expense for accounting purposes.

In Hollywood, the term "below-the-line" also has another connotation. It refers to the people whose salaries fall within this category, which is usually the crew or production staff on a film as opposed to the more recognized names. If your salary falls above the line, you've likely seen your name in lights; if it falls below the line, you're lucky if anyone has time to spot your name as the end credits scroll across the screen.