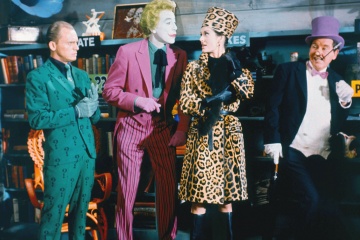 Costumes are one of many below-the-line expenses in a movie's budget.
Silver Screen Collection/Moviepix/Getty Images

As you settle into your seat at the theater and immerse yourself in the magic of a major motion picture, it's easy to forget that film is about much more than glitz and glamour. At its core, filmmaking is a serious business, one that represents a colossal $30 billion annual industry in the U.S. alone [source: Reuters]. Like any business, the movie industry runs on money, with many top films priced in excess of $200 million.

To keep track of expenses during the making of a film, Hollywood accountants divide expenses into two basic categories, distinguished by where they go in the ledger books. Above-the-line costs include some major expenses, including cast salaries and the director's cut. While these figures tend to get all the attention, the real costs of making a movie are below the line.

Below-the-line expenses -- so-named because they were traditionally listed beneath a thick black line used to separate them from above-the-line costs in accounting documents -- include virtually all the costs of film production, including salaries for the majority of the people involved. Need some seriously elaborate sets for a sci-fi flick? You'll find the costs of these sets below the line. Looking to buy some fancy period costumes for a Jane Austen film or train a Golden Retriever to act in a lighthearted buddy comedy? Include these expenses below the line, or risk facing your accountant's wrath.

Looking to learn more about below the line expenses? Read on for more information about Hollywood budgeting basics.