Is Superman mentioned in every 'Seinfeld' episode? 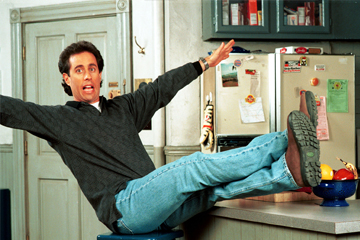 There's something blue! And something red! And he looks like he's flying! Could it be a Superman reference?
Bob Riha Jr/WireImage/GettyImages

Fans of the sitcom "Seinfeld" probably know that Jerry has a bit of a superhero complex. He doesn't try to save the world or rescue people from burning buildings -- far from it -- but he likes Superman. A lot. Not Batman, not Aquaman, just Superman. Any mention of another superhero's superiority is blasphemy to Jerry. As his lifelong friend George notes, "His whole life revolves around Superman and cereal." Jerry also happens to enjoy drawing naked pictures of Lois Lane ... not that there's anything wrong with that.

Without a doubt, Superman is one of the major recurring themes of "Seinfeld." Rumor has it that the Man of Steel is mentioned in every one of its 172 episodes. If that's true, is it because of Jerry Seinfeld's real-life fascination with Superman, or did the writers make a conscious effort to work Superman into every episode? And what counts as a mention? Do the characters just have to say his name, or does any kind of reference -- visual or otherwise -- count?

First things first: There might be people out there who could find a Superman reference in all 172 episodes, but it'd be a stretch. Superman Homepage writer Barry Freiman exhaustively researched the issue and was able to come up with only 46 episodes. There are only two overtly Superman-themed episodes -- 1994's "The Race" (in which the Superman theme plays during a dramatic footrace between Jerry and his elementary-school nemesis) and 1996's "Bizarro Jerry." But obvious Superman references abound in many episodes, such as George and Jerry's heated debate about Superman's sense of humor in "The Stock Tip" and Jerry's ruminations about Superman as a regular New Yorker in "The Café."

Beyond that, Freiman does count the frequent mentions of other superheroes -- and Lex Luthor, of course -- but glimpses of Jerry's Superman statue and refrigerator magnet don't figure into the total. However, he does consider the red-and-blue sweatpants Jerry wears in the pilot episode to be a Superman homage. Proponents of the "every episode" legend point to the fact that some recurring "Seinfeld" players, like Teri Hatcher and Patrick Warburton, later appear in Superman-themed productions. Freiman counts Hatcher's appearances for this reason but not Warburton's.

For the final nail in this myth's coffin, we have a firsthand rebuttal. Peter Mehlman, a writer and producer for most of the show's run, said there was no concerted effort to mention Superman. "He just magically appeared early in the series and evolved into a go-to guy for humor," Mehlman told Parade magazine in 2013. Superman's bravery and heroics are the perfect foil for the Seinfeld gang's general selfishness and cowardice, so the writers worked him in wherever they could. So if you were about to dust off your "Seinfeld" DVD set and start counting Supermen, you probably shouldn't bother. You'll never get to 172.

What are TV upfronts?
Quiz: How Much Do You 9021-Know?
How are TV commercials produced?