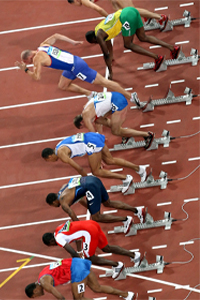 Competitors start the second heat of the men's 110-meter hurdles at the 2008 Beijing Olympics. The competitor wearing number 7 appears to have jumped the gun.
Mark Dadswell/Getty Images

Although many times are only published to the hundredth of a second, Olympic timing standards require that timekeeping be accurate to the millisecond. With such a small margin of error, timekeepers must plan for the worst. Twenty-first century technology, however, can give a time that's way more accurate than a millisecond.

Quantum Timerand Aquatic Quantum Timer -- Introduced during the 2012 London Olympic Games, the Quantum Timer increased the resolution of recorded time to one-millionth of a second, which is 100 times more accurate than the previous technology. It also showcases a precision of 0.1 parts per million. The precision measures the repeated reliability of the measurement, so this means that there is a maximum leeway of 1 second per 10 million seconds. In other words: It has to be not just accurate, but accurate every time. Another cool part of the Quantum Timers is that they have 16 independent clocks, so each runner or swimmer in a race can have information simultaneously shown on scoreboards or television screens.

False-start fail-safes -- Because many athletes "jump the gun," timekeepers must also be referees of a sort to preserve the accuracy of competitors' scores. Scientists have measured that an average human takes one-tenth of a second to react to a stimulus, such as the starting gun. In the Olympics, the clock stops if an athlete starts sooner than a tenth of a second after the signal is given, because this means he or she began to "react" before the gun was fired.

Often, the competitor who started prematurely is disqualified. In aquatic relay events, reaction time is analyzed not only at the start of the race but also as each swimmer "tags" his or her teammate (in this case, the touch pad). Scientists figured out it takes 27/1000 of a second for a foot to peel off the blocks. They decided that any start less than 0.04 seconds after a teammate tags the wall is a false start [source: Park].

In addition, the starting blocks used in both track and swimming events have electronic pressure plates. Introduced in London 2012, these blocks contained a significant advancement: They no longer use movement to measure a runner's false start. They now measure force against the block, which is supposedly more accurate [source: Swatch Group].

Because the official Olympic timekeeper provides heavily redundant systems and multiple timing devices with both numerical and visual data, timing disputes are usually resolved quickly by analysis. However, when a valid complaint is made, this almost always leads to research and advancement of the existing timing technology. For instance, after Silke Kraushaar's gold-medal luge win in 1998, it was discovered that the photoelectric sensors had a margin of error of exactly two milliseconds -- the span of time Kraushaar won by. In response to concerns about the system's accuracy, then-U.S. Olympic Committee Principal Engineer Tom Westenburg developed the high-modulation, triply-redundant system in current use, which is accurate to less than half a millisecond [source: Leo].