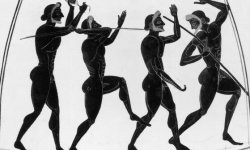 Today, the conventions of the Olympics are pretty thoroughly plotted out. Each host city adds its own local flavor, of course, but it does so within the scope of the overarching rules and bylaws laid out in the Olympic Charter. For the most part, the audience knows what to expect from one games to the next. Whether it's the giddy fanfare that surrounds the Opening Ceremonies, the stirring performance of the winners' national anthems, the glistening tears so common during the medal ceremonies, or the kaleidoscope of Olympic sports themselves giving the world's best of the best their chance to shine.

Occasionally, you might see a new sport added or an old one dropped (the 1998 introduction of those rowdy snowboarders comes to mind). But, by this point in Olympic history, it's rare to see an array of new events get tried out in a single games. But during the somewhat haphazard 1900 Olympic Games, that's just what happened. The games, which took place in France and accompanied the World's Fair, bore little resemblance to the Olympics of today. In fact, some of the sports (many of them unofficial) that debuted there weren't ever attempted as Olympic sports again -- because, boy, were they bizarre. Poodle grooming and van driving were in the mix. We're not joking.