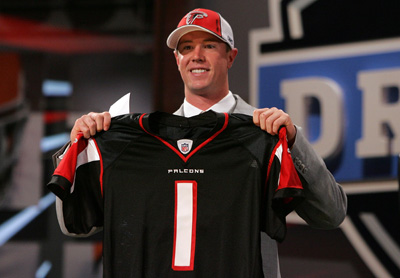 Fans at the Draft

While millions of fans are only able to watch the draft on television, there are a few who attend the event. These fans cheer and jeer just as they would if they were sitting in the stands on game day.

Tickets are available to fans on a first-come, first-serve basis about a week prior to the draft, and are distributed on the morning of the draft's first day. Each fan is given just one ticket, which can be used for admission for both days of the draft.

Just as someone has to be the first pick in the draft, someone has to be last. This player is given the dubious moniker of Mr. Irrelevant. Although it sounds insulting, there are hundreds of players who wish they were in this player's shoes.

Mr. Irrelevant is actually the most celebrated player outside of the first round. In fact, he is the only player in the draft to have a formal celebration thrown in his honor. Since 1976, Paul Salata, of Newport Beach, CA, has arranged an annual event to celebrate the last player selected in each draft. Salata had a brief career in the 1950s as a receiver for the Baltimore Colts.

After being flown to California, Mr. Irrelevant is paraded through Newport Beach. He'll then spend the next week going to Disneyland and participating in a golf tournament, among other activities. Each Mr. Irrelevant also receives the Lowsman Trophy, a small bronze statue of a player fumbling a ball. The Lowsman is the antithesis of the Heisman Trophy (pronounced Highsman), which is annually given to the best player in college football.

Almost every athlete that plays high school football dreams of one day playing in the NFL, but for most players that dream is never realized. The hard truth is that the NFL has a finite number of jobs, and only the most talented are selected to fill those positions.

One million high school students participate in football annually, according to the National Federation of State High School Associations. Very few of those players, only one in 17, will even play college football.