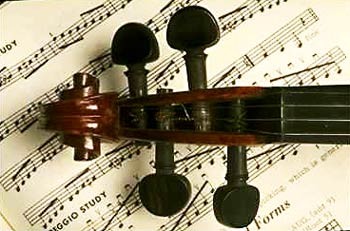 The sheet music for a song can be copyrighted.

Music licensing in the United States is made possible by the protection that U.S. copyright law provides for artists. According to this article from the U.S. copyright office:

The copyright code of the United States (title 17 of the U.S. Code) provides for copyright protection in sound recordings. Sound recordings are defined in the law as "works that result from the fixation of a series of musical, spoken, or other sounds, but not including the sounds accompanying a motion picture or other audiovisual work." Common examples include recordings of music, drama, or lectures. Copyright in a sound recording protects the particular series of sounds "fixed" (embodied in a recording) against unauthorized reproduction and revision, unauthorized distribution of phonorecords containing those sounds, and certain unauthorized performances by means of a digital audio transmission. The Digital Performance Right in Sound Recordings Act of 1995, P.L. 104-39, effective February 1, 1996, created a new limited performance right for certain digital transmissions of sound recordings.

So a sound recording is just that -- a recording of sounds.

There are several things that can be copyrighted in any sound recording for a song.

According to the the U.S. copyright office, copyright protection extends to the contribution of the performer(s) whose performance is captured.

For example, let's say I sit down and I write a piece of music and entitle it "Electric Snik". I record it onto a tape using an electronic keyboard:

Let's say that I also come up with lyrics for a song called "She's So Incredible" that I sing to the melody of "Electric Snik". Now I play "Electric Snik" and I sing "She's So Incredible" while recording it on a tape recorder. If I send the tape to the U.S. copyright office with the proper forms and the registration fee, I will own copyrights for the song, the lyrics, and the actual performance recorded on the tape.

Once I have the copyrights, I can sell rights to the song if I choose to, and I can also prevent anyone else from using the music, the lyrics or the actual performance of the song. I "own" the whole song and all the rights to it. I can license the song in any way I choose.