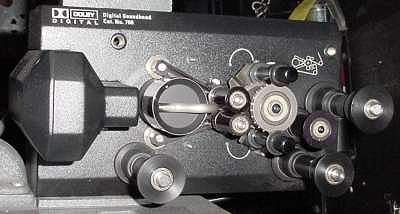 Quite possibly the most popular of the digital formats is Dolby Digital, which is also known by several other names:

Dolby Digital uses the space between the sprocket holes to encode information. Look at the photo below and notice the gray dots between the holes. If you look closely, you can even make out the Dolby Digital logo in the center of each segment!

The Dolby Digital reader mounts on top of the projector (some projectors now have the reader built right in) and scans the film as it passes through. Light from an LED shines through the film onto a CCD. The image, containing little specks that represent 1s and spaces that represent 0s, is sent by the reader to a DSP-based Dolby Digital Processor unit that turns the binary data back into sound.

This configuration is commonly referred to as 5.1, for five main channels plus an effects channel. The effects channel uses a subwoofer and is often called the boom channel because its main use is for explosions and other powerful, teeth-rattling sounds.

In the event of failure of the Dolby Digital reader or problems reading the digital information, the film has Dolby Stereo analog tracks.