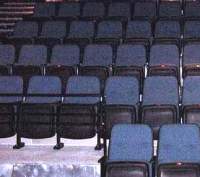 A theater with stadium seating

To watch a movie on the screen, you obviously need somewhere to sit with a view of the screen. Theater seats have come a long way in the last few years. Not long ago, most theaters had small hard seats with short backs and fixed arms. The only adjustment was whether the seat was up or down.

Seating in many theaters today is much more comfortable. The seat backs are full height and both seats and backs are have thick cushioning. The arms between the seats lift up out of the way and have cup holders built into the end of them. Quite often, the seat backs rock slightly to give you more freedom of movement.

Probably the single biggest improvement in theater seating has been the introduction of stadium seating. A conventional theater has a floor that slopes at about 15 degrees. Rows of seats are arranged so that each row is about six to eight inches higher than the row in front of it. Someone sitting in the row in front of you can easily obstruct all or part of your view of the screen.

With stadium seating, the rows are arranged on a series of terraces or steps instead of a slope. This design allows each row to sit 12 to 15 inches higher than the row in front of it. It also means that virtually every seat in the theater has an unobstructed view of the screen, even if the theater is packed!

A common movie-goer question is, "Where is the best place to sit?" Preferences vary, but there is an optimal place to experience the sound system in most theaters. Choose a row about two thirds of the distance from the screen to the back of the theater. Try to sit one or two seats from the exact center of the row. The reason is that most sound technicians check the audio levels from the center seat about two thirds back from the screen. Since the sound from right and left speakers are equalized for the center, you want to sit slightly off-center to enhance the stereo effect.

For more information on movie screens and related topics, check out the links below.

Special thanks to Bill Peebles, owner of the Lumina, Rialto, Colony and Studio theaters in Raleigh, NC, for the screen and theater photos, and for his assistance.