Even if you're a film buff and a frequent movie-goer, you may not have ever given movie screens much thought. Most of us are so wrapped in what's projected on them, we never consider the screens themselves. But if you think about it, movie screens are a crucial element of the cinematic experience and one of the most important devices you'll find in a movie theater.

At first glance, movie screens look incredibly simple -- just a big rectangle of white plastic. But it turns out there is actually a fair amount of technology and design involved in their creation. In this article, you will learn about the different types of screens movies are projected onto, find out why stadium seating is so popular and get some helpful tips for finding the best seat in the house!

Looking out from behind the screen

If you go to a theater to see a movie, chances are it will be projected onto a screen. A movie screen is usually made of heavy white vinyl and is categorized by the amount of light it reflects.

Close-up: perforations on the front of the screen

There are four main categories:

Pearlescent is probably the most common choice for a typical movie theater. To make a pearlescent or silver screen, a reflective coating is added to the matte white vinyl. A glass bead screen actually has thousands of tiny glass marbles embedded in a transparent coating on the surface of the screen.

Movie screens are designed not only to present a great picture, but also to support the theater sound system. Most movie screens have tiny perforations in them so the audience will be able to hear speakers placed behind the screen. In a typical theater, you'll find three speakers behind the screen, located at the far left, center and far right. This makes the sound seem more realistic, particularly when someone is talking. The audio is delivered through the appropriate speaker so that a sound seems to come from the person or thing talking or making noise. This makes for a more immersing movie experience.

In addition to the amount of reflectivity, a theater owner has to choose the curve of the screen. The three choices are:

A flat screen is just that, a screen with no curve at all. Horizontal-curve screens curve toward the audience slightly at each end. This curving is to avoid the pincushion effect, particularly in auditoriums with a short distance from the projector to the screen. Pincushioning describes the distortion of the image on the screen by the changes in distance of the light from the projector. On a flat screen, light from the projector travels a shorter distance to reach the middle of the screen than it does to reach the edge of the screen. Since the size of the projected image is determined by the distance to the screen, this makes the image appear slightly larger towards each end. The diagram below demonstrates this concept: 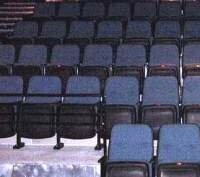 A theater with stadium seating

To watch a movie on the screen, you obviously need somewhere to sit with a view of the screen. Theater seats have come a long way in the last few years. Not long ago, most theaters had small hard seats with short backs and fixed arms. The only adjustment was whether the seat was up or down.

Seating in many theaters today is much more comfortable. The seat backs are full height and both seats and backs are have thick cushioning. The arms between the seats lift up out of the way and have cup holders built into the end of them. Quite often, the seat backs rock slightly to give you more freedom of movement.

Probably the single biggest improvement in theater seating has been the introduction of stadium seating. A conventional theater has a floor that slopes at about 15 degrees. Rows of seats are arranged so that each row is about six to eight inches higher than the row in front of it. Someone sitting in the row in front of you can easily obstruct all or part of your view of the screen.

With stadium seating, the rows are arranged on a series of terraces or steps instead of a slope. This design allows each row to sit 12 to 15 inches higher than the row in front of it. It also means that virtually every seat in the theater has an unobstructed view of the screen, even if the theater is packed!

A common movie-goer question is, "Where is the best place to sit?" Preferences vary, but there is an optimal place to experience the sound system in most theaters. Choose a row about two thirds of the distance from the screen to the back of the theater. Try to sit one or two seats from the exact center of the row. The reason is that most sound technicians check the audio levels from the center seat about two thirds back from the screen. Since the sound from right and left speakers are equalized for the center, you want to sit slightly off-center to enhance the stereo effect.

For more information on movie screens and related topics, check out the links on the next page.

Special thanks to Bill Peebles, owner of the Lumina, Rialto, Colony and Studio theaters in Raleigh, NC, for the screen and theater photos, and for his assistance.