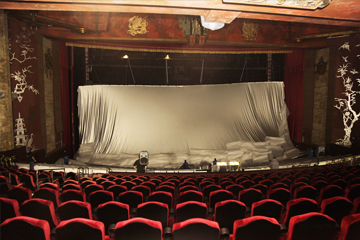 Have you noticed that your town's IMAX screen doesn't seem as big as the one you remember from the museum or the city theater when you were younger? You're not going crazy.
Clarissa Leahy/Getty Images

In 2009, comedian Aziz Ansari wrote an angry, profanity-filled blog post expressing his outrage about going to see an IMAX movie and discovering the screen wasn't the 72-foot behemoth he was expecting. This post set off a flurry of responses and opinions on the Web, with everyone from (the now deceased) film critic Roger Ebert to the CEO of IMAX weighing in.

Have you noticed that your town's IMAX screen doesn't seem as big as the one you remember from the museum or the city theater when you were younger? You're not going crazy.

Traditional IMAX screens are 72 feet (22 meters) high, providing a completely immersive visual and auditory experience for the viewer. Tickets for IMAX movies usually cost several dollars more than regular movie tickets to cover the cost for upgraded technology. However, moviegoers across the country are noticing they're paying the same upgraded ticket price without the giant screen. This brings up many consumer questions. Why are some IMAX screens smaller? Do these smaller screens offer the true IMAX experience?

The largest IMAX screen gave filmgoers in the 1970s a whopping 5,000 square feet of viewing area. In a regular movie theater today, an IMAX screen averages about 1,100 square feet [source: Waniata]. That may seem like a huge scam, especially where ticket prices are concerned.

There's an explanation for the size discrepancy. Back when IMAX technology was developed, it wasn't using digital projection. Now, almost every movie theater uses digital projection. In order to stay profitable and keep expanding, IMAX needed to change its business model. Slowly (and quietly), the company began focusing less on the giant screen and more on digital technology. To bring IMAX to the masses, it's simply not feasible to retrofit every movie theater to accommodate a 72-foot high screen.

IMAX engineers realized that they could preserve the IMAX hallmark of visual immersion as long as movie screens take up or exceed your entire field of vision. So when they installed the IMAX experience in regular theaters, they removed several rows of seats, bringing the screen about 30 feet closer to the audience. The screen can also go wall-to-wall and floor-to-ceiling. You still get that immersive feeling of the huge screen without the actual huge screen.

It's a controversial setup. Some insist that these digital IMAX screens should be called IMAX-Lite, and others believe the digital format isn't as crisp as the original technology. If you're an IMAX purist, it's best to research the venue before you buy your tickets so you can guarantee a true big-screen IMAX experience.