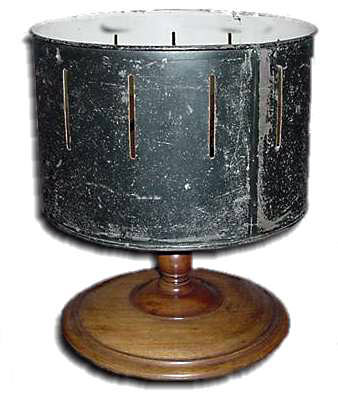 Movies, short for moving pictures, have been around for more than a century. Movies work because of persistence of vision, the fact that a human eye retains an image for about one-twentieth of a second after seeing it. In the early 19th century, several devices began to appear that used persistence of vision to create the illusion of motion from still images. The zoetrope, invented by William George Horner in 1834, consisted of a series of pictures on a paper strip arranged on the inside of a revolving drum. The drum had small slits you could look through to see the pictures.

In the case of a particular sort of zoetrope called the praxinoscope, there was a mirrored drum in the middle, so that you could see the pictures by looking through the top of the device. The pictures on the drum changed slightly from one to the next. By spinning the drum, you could make the pictures move fast enough to fool your eye into thinking it was looking at one moving picture. These pictures were typically of some repetitious movement, such as a person walking or dancing, because this movement could be looped easily. In a looped strip of images, the last picture in the series would almost match up to the first one, so that the images would create a single cycle of the simulated movement, which could be infinitely repeated to produce the illusion of continuing movement.

The earliest film projectors, such as the magic lantern, actually showed up in the late 1600s, but they presented only still images. Some of the earliest projectors to show moving images were simply modified zoetropes. Creative entrepreneurs used translucent strips on the drum and placed a light source, usually a lantern, in the middle of the box. They would then project the image through a small hole, or aperture, onto a blank wall or piece of stretched white cloth. Obviously, these devices were very limited. They were operated by hand and were used the same type of looping animation or photos as the original zoetrope.

Pictures line the inside of the drum of a zoetrope.

Everything changed with the invention of Thomas Edison's kinetoscope in 1891. The kinetoscope used a motor to revolve a strip of film in front of a light source. The light source projected the image from the film on a screen in a booth. As it became obvious that people were willing to pay money for this type of entertainment, many inventors began to design variations of Edison's original device. One such variation, the manually operated kinora, was invented by the Lumiere brothers and enjoyed great success into the 1930s.

The Lumiere brothers, Louis and Auguste, created the astounding cinematographe in 1895. This portable device was a camera, film processing lab and projector all in one package! The brothers traveled the French countryside shooting films that lasted a few minutes at most. They then processed and projected the film on location! The next year, the vitascope (which was another variation of the kinetoscope) heralded the dawn of a new age of entertainment. The vitascope worked like a basic kinetoscope with one essential difference: The image was projected onto a large screen in a room instead of a small one in a booth. Thus began the road to the development of the first theater, the Nickelodeon in Pittsburgh, PA.

Throughout the 20th century, movies and projectors grew in complexity. Engineers outfitted projectors with sprockets and spools to make it easier to move the film rapidly in front of the light source. Movies went from a few minutes in length to an hour or more, and by the late 1920s, movie-goers were enjoying "talkies," films that included a soundtrack. The first color movies appeared in the 1930s, and the 1940s and 1950s saw the development of several new processes and screen formats. The platter, which revolutionized the industry, debuted in the 1960s. Automation began to take hold in the 1970s and 1980s, and the 1990s saw the advent of digital sound and the growth of LCD technology. Still, although modern projectors are brighter, faster and more functional than their predecessors, and manufacturers have added many bells and whistles over the years, the essence of the projector has remained the same since the beginning of the 20th century.

Although digital projectors are now springing up in select theaters, the movie-theater industry is still overwhelmingly analog. This is simply a matter of practical consideration. Most theaters have spare parts and local technicians who can service an analog projector easily. Repairing a digital projector, on the other hand, often requires flying in a specialized technician in addition to buying replacement parts. Digital projectors use LCDs to create the image instead of film. At first, this sounds great -- no more scratches or spots! But LCD projectors do have a major drawback: If the LCD has a bad pixel or two (which happens quite often), that blemish will appear throughout every movie shown on that projector. With film, once you replace the scratched film or go to another movie, you lose all the picture blemishes.

For more information on movie projectors and related topics, check out the links below!