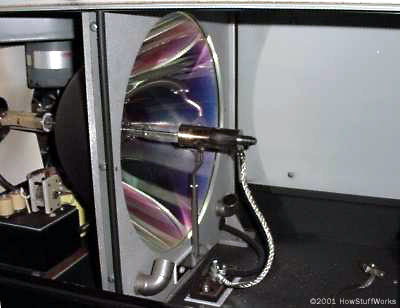 The key element in a projector is the light source. Carbon arc lamps have been used since the early 1900s but have a very short life. Xenon bulbs are the most commonly used lamps today. Xenon is a rare gas with certain properties that make it especially suited for use in projectors:

Constructing a xenon bulb is a tricky process. The bulbs have a quartz envelope instead of a glass one because the bulbs get very hot. The quartz shell houses a cathode and an anode. Since the xenon gas itself is conductive, the bulb doesn't need a filament. Instead, when a current is applied to the bulb, the charge arcs between the cathode and anode. For the bulb to shine brightly enough, the xenon must be pure and the quartz envelope must be vacuum sealed. Because of the rarity of xenon and the complicated processes involved in bulb production, xenon bulbs generally cost $700 or more each.

The xenon bulb is mounted in the center of a parabolic mirror located in the lamphouse. The mirror reflects light from the bulb and focuses it on the condenser. The condenser is a pair of lenses used together to further intensify the light and focus it on the main lens assembly. The heat generated by this focused light is incredible. That's why film melts so quickly when the projector stops spooling it.

As the focused light leaves the lamphouse and enters the projector, it is intercepted by the shutter. The shutter is a small, propeller-like device that rotates 24 times per second. Each blade of the shutter blocks the path of the light as it comes to a certain point in its revolution. This blacking out is synchronized with the advancement of the film so that the light doesn't project the fraction of a second when the film is moving from one frame to the next. Without it, the film would seem to flicker or have faint impressions of the images out of sync. Many projectors use double shutters that rotate in opposite directions. This causes the light to be cut off from both the top and bottom of each frame, further reducing the possibility of flicker.

Before the light gets to the film, it also passes through an aperture gate. The aperture gate is a small, removable metal frame that blocks the light from illuminating anything but the part of the film that you want to see on the screen. Two good examples of unwanted images would be the sprocket holes and audio information along the sides of the film. Aperture gates come in a variety of sizes that correspond to the screen format of the movie.

From the aperture gate, the light passes through the film and into the main lens. The lens is removable and can be changed depending on the format of the film. The two most common lenses are flat and CinemaScope. Many projectors have a turret that allows both types of lenses to be mounted, and the projector will rotate the required lens into place.