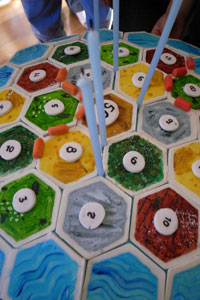 Like a lot of games, Settlers of Catan is relatively easy to learn, but its varied game play and dependence on trade makes it ripe for inventive strategy. Expansion sets alter the complexity of the game and what happens changes greatly depending on whom you're playing against, but here are just a few basic strategy suggestions:

Know your costs. Familiarize yourself with building costs so you'll know which resource investments benefit which building projects. For instance, lumber and brick are vital to building both roads and settlements. Cities and development cards, however, incur ore costs.

Trade smart. Trade is vital to success in Settlers of Catan, so make sure every one you make furthers your path to victory. Early in the game you can safely swap with everyone, but later on you'll want to limit those interactions. Never trade with a player who is about to win the game.

Know where to build. Location, location, location! You want to kick off the fun by starting settlements on high-pip terrains. Also try to make sure your first settlements border three different terrain types to diversify your returns. Don't settle near the ocean until later in the game.

Don't bait the robber. Like it or not, someone is going to roll a 7 so take proactive measures. Make sure you always have fewer than seven resource cards before another player rolls in order to avoid losing half your hand to the robber. Spend the resources on building early and buy up development cards later on to further your growth and protect what you've built.

Know how to win. The only way to win is to amass 10 victory points, but there are different strategies to achieve this goal. The three main ways consist of 1) building lots of settlements and the longest road 2) building lots of cities and amassing the largest army or 3) achieving a balance between the two.

Think you have what it takes to rule the island? Explore the links below to learn even more about Settlers of Catan and other popular brain games.