How to Play Settlers of Catan: Board Setup 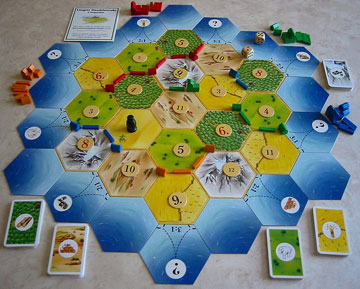 It's time to crack open the box, set up the board and discuss the rules. Multiple expansion packs and special editions increase the game's complexity, but for the purposes of this article, we'll look at the rules for the original game.

The first thing you'll notice upon opening the box is that there's no traditional, folding game board. Instead, you build the island of Catan out of 19 hexagonal terrain tiles and surround it with a ring of 18 ocean pieces. Players can construct this island randomly or according to a predetermined layout. Either way, the island -- and the course of the game -- changes every time people sit down to play it.

You'll also spy a small, circular number token with a number, a letter and a series of pips (dots) sitting atop each nondesert terrain tile. The letter pertains to game setup, but the number relates to the number rolled. If a player gets a 4, only terrains with a 4 token yield anything to the people with settlements or cities bordering them. The series of pips merely refer to the probability of that number coming up. A 4 tile, for instance, bears three out of a possible six pips because there's an overall 8 percent chance of rolling that number on two dice. This way, players can judge by the pips which terrains are most likely to give up the goods.

Ready to build some settlements? We'll explore game play on the next page.