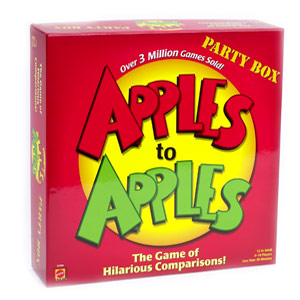 Apples to Apples is a popular -- and unpredictable -- party game.
Courtesy of Mattel

Apples to Apples may be a wildly popular and relatively simple card-based party game -- the objective is to simply match nouns to adjectives -- but the results are often hilarious.

To play Apples to Apples, each player is dealt seven Red Apple Cards, each bearing the name of a celebrity, a historical figure, a place name, event or object. The dealer for each round is also the game's judge. The judge flips over a single Green Apple Card with an adjective written on it, like "popular," "timeless" or "zany." Each player submits what he or she believes to be the best noun in their hand that matches the adjective. The judge picks the best match and the winner keeps the Green Apple Card. The player who collects the most green cards wins the game.

The brilliance of Apples to Apples reveals itself when a player makes an unexpectedly appropriate (or inappropriate) match. For example, let's say the adjective is "senseless." A perfectly appropriate match might be "violence" or "war," but the winning card is almost certainly going to be "Hellen Keller" or "In a coma." Are you starting to get it?

In addition to the Party Box versions, there's a popular kids' spinoff called Apples to Apples Junior, a Disney version, travel version, and a version called Sour Apples to Apples that punishes the worst match with a spinning wheel of doom. Punishments vary.

Apples to Apples has received several major game awards, including Games magazine's "Party Game of the Year" in 2000, the Toy Industry Association's "Toy of the Year" in the game category in 2006, and it was chosen as a "Mensa Select" game in 1999 by Mensa International, the international club for brainiacs [source: Out of the Box].

On the next page, we'll run through the standard rules and game play for a rousing game of Apples to Apples. 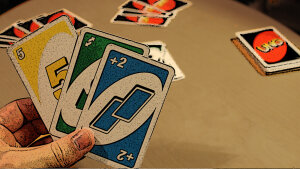