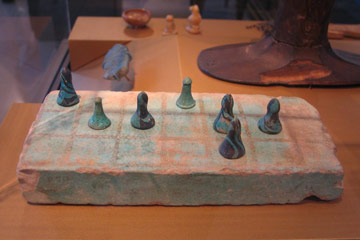 The game of Senet may well have been invented as an entertaining way to pass the time, but as Egyptians became increasingly fascinated with the gods, it began to take on greater symbolism. By 1300 B.C., King Tut and his contemporaries probably played Senet to simulate the journey through the underworld and perhaps even to symbolically seal their own eternal fate.

There's evidence that ancient Egyptians believed winning a Senet game could result in a soulful union with the gods. The starting square in the upper left hand corner of the game sometimes features a bird-headed divinity, thought to announce the arrival of souls into the court of judgment and arrange their passage through the netherworld.

As you progress through the game, you'll symbolically sail on Re-Horakhty's bark across the choppy waters of the netherworld and through its 12 dark regions (one for each hour of the night), where newly departed souls are judged for their sins and either reap their punishments (torture and annihilation) or rewards (food, drink and eternal life with Ra, the sun god). If you were the first to pass your ab from the board, your soul would be one of the fortunate ones; you'd be assured of your survival while sojourning through the netherworld and could rest assured that upon your death you'd rise with Re-Horakhty in the eastern sky at dawn, where you would become one with Ra. Not bad for winning a board game, right?

This also explains why contemporary depictions of the game increasingly mirrored Senet's value as a religious ritual rather than an entertaining pastime. Some ancient illustrations show only one person playing the game; the opponent couldn't be seen because it was the player's own soul [source: Piccione]. Eventually, the game itself may have transcended the necessity of play: Merely having it in one's tomb may have been enough to secure a positive afterlife.

Despite its religious significance and favor among the ruling classes, secular versions of Senet co-existed and were played by Egyptians of varying stations. Although the rules remained the same, the intent was vastly different; secular versions were still played recreationally.