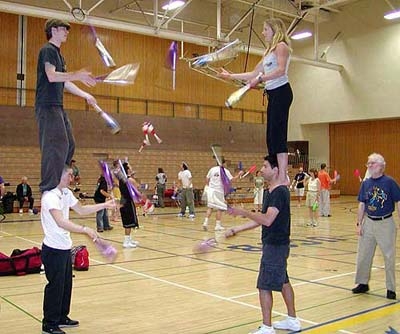 It takes math and physics to keep these jugglers up.
Photo courtesy of Jack Kalvan

­It's not surprising that many jugglers are mathematicians or physicists. Juggling demonstrates not only some fundamentally important concepts in physics, but it also inspires people to create complicated theorems.

Claude E. Shannon, a brilliant mathematician, proposed a juggling theorem that elegantly describes the relationship between how long props are in a juggler's hands and how long they are in the air. Here's his equation:

Shannon's equation illustrates the importance of a juggler's hand speed when juggling. As N increases, the juggler begins to lose the ability to vary the speed of his pattern while keeping it stable. Remember, H will remain constant unless the juggler either sprouts more hands or another juggler comes into the pattern.

Shannon built a juggling robot from an Erector set. His juggling robot had two arms and could bounce juggle up to three small metal balls against a drum. Other engineers have built robots that can bat objects upwards indefinitely using complex algorithms to make corrections. The Web site for the company SARCOS features a video of a humanoid robot juggling a three-ball cascade pattern. The robot has cups for hands and makes each toss and catch in a smooth, fluid motion.

Mathematician Jack Kalvan proposed an equation that describes a spatially optimal pattern, meaning it "allows for the same amount of error at all points along the flight path where collisions are most likely" [Source: Juggling.org]. Kalvan's equations are complicated and concentrate on variables such as the arc of each throw, finding the best distance between the arcs made by throws from each hand, and the ratio between when a hand holds a ball and when hand remains empty.