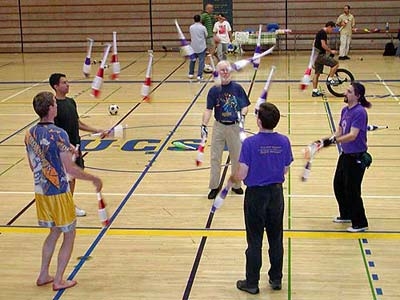 Part of the fun in juggling is playing with other people. Jugglers tend to be social creatures, and most cities and college campuses have a club or group of jugglers who meet regularly. Juggling lends itself to many different kinds of interaction, including cooperation and sabotage.

One popular game to play between jugglers is stealing and replacing. To steal from another juggler is to take at least one prop from his pattern as he's juggling. Replacing involves adding a prop to the pattern after stealing a previous prop. It's possible to steal all of another juggler's props as he's juggling and take over his juggling pattern. To do this, you stand in front of the victim and get a feel for the pattern. Once you feel comfortable with the rhythm, you reach across and catch the victim's tosses, one after the other, until you are juggling all of the victim's props. Of course, the victim could just steal the props right back. You could then constantly steal from one another with nearly every toss.

To steal clubs, you can stand to one side of the victim -- facing the same direction as he is -- and reach around to take over the pattern yourself. If done correctly, the pattern of objects will stay stationary as you take your victim's place. With the proper timing, you and another juggler can cycle through stealing the same set of clubs as they stay in the same pattern. To observers, it looks like the props are juggling the performers. You can also steal and replace clubs by standing in front of a juggler. When he begins to toss a club into the air, you can catch it by the body and put a second club into his other hand, completing the juggler's catch for him.

Jugglers can also juggle in tandem. Two jugglers stand close together -- one juggler acts as the left hand, the other the right -- and share the pattern of drops. Jugglers may stand side by side, face one another or even stand back to back.