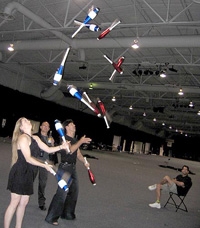 Three-ball juggling can be entertaining and challenging, but it's just the beginning. Jugglers have claimed to juggle up to 14 props at once. Juggling so many objects requires a lot of skill, speed and practice.

A general rule of thumb in juggling is that an odd number of props requires a crisscross pattern, in which the prop is tossed from one hand to the other. An even number of props requires two separate groups of objects juggled in each hand. For example, the standard four-prop juggling pattern is two props juggled separately by each hand. There are patterns that allow jugglers to cross even numbers or keep odd numbers separate, but it's usually OK to assume the general rule applies.

With an even number of props, a juggler must handle two or more objects in each hand. There are two main patterns for juggling objects one-handed. The first is the fountain, in which a juggler tosses and catches the balls in a circular pattern in one hand. The other is juggling in columns, in which each ball is tossed and caught at the same position, traveling only up and down without moving side to side. Once a juggler is able to handle more even numbers of objects, he must concentrate on the fountain pattern.

In order to juggle greater numbers of props successfully, jugglers must toss their objects higher in the air. For a juggler, the height of his toss is proportional to how much time he has in between tosses. The standard five-ball pattern is usually a little higher than that of your typical three-ball pattern. Seven- and nine-prop patterns need even more height if a juggler is to maintain control. Jugglers call the practice of juggling large numbers of props, particularly in terms of competition, numbers juggling.

Not Your Typical Toss

Two other kinds of juggling are closely related to toss juggling -- cigar-box juggling and shaker-cup juggling. Cigar-box juggling involves manipulating three or more boxes by building a row of boxes, holding on to the two boxes at the end, and then tossing either the entire row or portions of the row while switching boxes in and out of the pattern. Shaker cups bear a passing resemblance to cocktail cups used by bartenders. Juggling with them involves nesting cups inside other cups, tossing them in the air and catching them in a very noisy display.