Throwing in a Third Ball 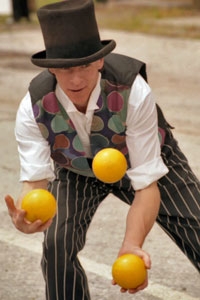 When you've mastered the crisscross pattern of tosses, it's time to add the third ball. Hold two balls in your dominant hand. It might feel unwieldy at first, but you'll get used to it quickly . Always start with the hand that has the most props in it first. Toss the first ball to your other hand, just as you've been practicing. Again, once the first ball peaks, toss the ball from your other hand. As that ball peaks, toss the third ball from your dominant hand to your other hand. Congratulations, you've just juggled a flash of three balls!

Of course, not everyone catches on that quickly. Some people find it fiendishly difficult to make that third toss. There are a couple of ways to try to­ get around this. One is to stop worrying about making catches -- just make the tosses. Again, it might help to count your tosses out loud. Another good remedy is to put two balls in your non-dominant hand. It might make the first toss a little unpredictable, but many people find that switching off can help them break the habit of holding on to the third ball.

Maintaining a cascade is pretty easy once you get the hang of it. It's just a series of tosses from one hand to the other, and once you build up the muscle memory needed to make consistent tosses, it's a snap. The only tricky bit is that you already have an object in the air while you're doing it. The most common issue with jugglers who have just learned the cascade is chasing the objects. Many people find that each throw goes a little farther out from the body, requiring them to chase the balls. Jugglers will tell you to stand in front of a wall when you juggle so that you can't move forward. With enough practice, you should soon be able to juggle while standing still.