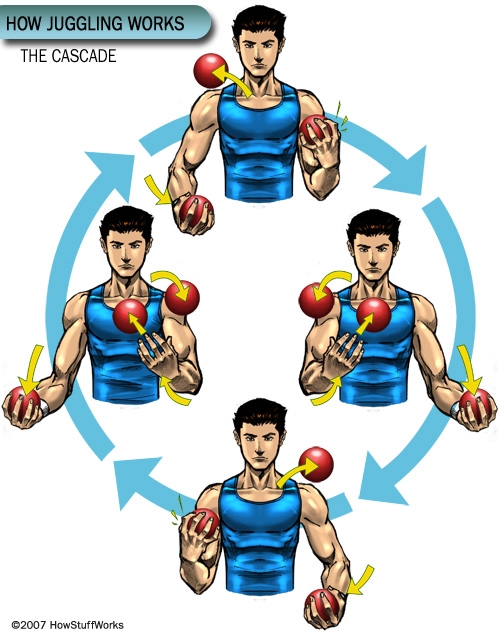 So you want to learn how to fling machetes around while balancing on a board that's on fire. Where do you start? Well, unless you want a trip to the emergency room, the best place to start is with harmless juggling balls. This section will help you learn the basic three-ball cascade pattern of toss juggling.

When most people try to learn to juggle with no instruction, they tend to start with two balls -- one in each hand. They begin by tossing the first ball in an arc from one hand to the other (normally from their dominant hand to their other hand). Then, as the ball reaches its zenith, they hand off the second ball to the hand that made the toss and then catch the tossed ball. Since they are using two hands to move two objects around, this isn't really toss juggling. It is, however, the basis for the shower pattern, which uses three or more objects. The shower pattern is actually a relatively challenging pattern, particularly for beginners.

Much easier than the shower pattern is the cascade pattern. Cascade patterns require you to toss a ball in an arc from one hand to the other and back again. The arc of each toss goes inside the path of descent of the previous toss. When you juggle, your hands move in a figure-eight motion. Your right hand moves clockwise and your left hand moves counterclockwise in alternating tosses. You can think of it as making scooping motions toward the center of your body. It sounds complicated, but it's actually quite simple.

To begin, get three balls (or bean bags, as they drop dead and you'll be dropping them a lot). All three should be the same size and weight. Put two of them down for now. Place your feet about shoulder width apart, and hold your arms bent at a natural and comfortable angle. Toss the ball from one hand to the other and back again. You want your arcs to peak a little higher than eye level. Consistency is important -- you need the height to be the same whether you're throwing from your right or left hand.

Once you have a feel for the toss, it's time to pick up a second ball. Hold one ball in each hand. Toss the ball in your dominant hand in an arc just as you've been practicing. As it peaks, toss the second ball in an arc that goes up inside the descending ball's path. Avoid handing the second ball to your dominant hand or throwing both balls into the air at the same time. You should be able to count the two tosses distinctly.

You won't be able to create a steady, smooth pattern using only two balls, so don't worry if it feels a little awkward. Once you feel comfortable starting with your dominant hand, it's time to switch and start with your other hand for a while. Nothing else should change as long as your tosses are consistent. If you find yourself throwing both balls at the same time, you might want to designate your tosses by saying "one, two" or "left, right."