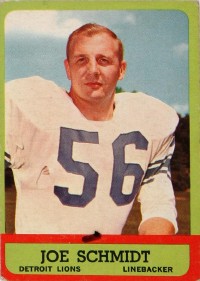 Joe Schmidt was best known as one of football's run stoppers. See more pictures of the greatest football players.

Contrary to popular opinion, Detroit's Joe Schmidt did not invent the middle linebacker position; he just played it better than it had ever been played before. Few have played the spot better since.

In his first two seasons with the Lions, 1953 and 1954, the former University of Pittsburgh star played as an outside linebacker in the then-prevalent 5-2 defense (five linemen, two linebackers). But when a weakness developed up the center, Detroit coach Buddy Parker switched to a 4-3 with Schmidt moving into the middle.

The 4-3 required an unusually versatile middle linebacker. He needed to be strong enough to move into the line and stop running plays, quick and agile enough to evade 250-pound blockers and run down plays to the outside, fast enough to drop back to cover pass receivers, and smart enough to diagnose enemy plays before they developed.

Two frustrating seasons followed, but in 1957 the Lions were back in the championship game. Their 59-14 dismantling of the Cleveland Browns was one of the most one-sided routs ever seen in the long history of NFL title tilts. Schmidt and company held the great Jim Brown to only 69 rushing yards.

Schmidt's college career had been checkered. He returned an intercepted pass 60 yards to help upset Notre Dame 22-19, and he received some All-American mention as a senior. But mostly he'd been dogged by injuries. The Lions waited until the seventh round before drafting him because they questioned his durability.

He was All-NFL nine times and chosen for nine consecutive Pro Bowls. In 1973, he was named to the Pro Football Hall of Fame.