by the Editors of Publications International, Ltd. Aug 5, 2007 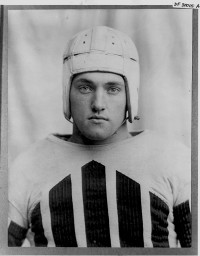 Dan Fortmann had intended to pursue a medical career rather than pro football. See more pictures of football players.

Legend has it that canny George Halas chose Colgate guard Dan Fortmann as the Chicago Bears' ninth and last selection in the NFL's 1936 player draft (the first ever held) just because he liked the young man's name.

If there's any truth to that, it was certainly a great hunch! In 1965, when Fortmann was named to the Pro Football Hall of Fame, he was only the second guard to be enshrined.

Along with his physical opposite, tackle "Jumbo Joe" Stydahar (the Bears' first choice in that '36 draft), Fortmann made the left side of Chicago's line truly superb. His explosive charge made him a sure blocker despite his relatively small size. From his linebacker position, he was a deadly tackler and fast enough to cover on passes. He quickly became a team leader despite his youth.

Although he had, without doubt, great physical ability, Fortmann's greatest attribute was his mind. At Colgate, he was a Phi Beta Kappa scholar. With the Bears, he showed his genius by diagnosing enemy plays brilliantly. He earned his medical degree while playing for the Bears, but long before he began practicing medicine, he was an NFL doctor of defense.

Paired with big George Musso, Fortmann gave the Bears the best pair of guards in the league. He earned All-NFL honors six straight years -- from 1938 until he retired to enter medicine in 1943. During his eight years with the team, the Bears won three NFL championships and took divisional titles on two other occasions.

Not surprisingly, Fortmann enjoyed continued success in his post-football career as a highly respected doctor on the West Coast. For a time, he was one of the Los Angeles Rams' team physicians.